Why Are There So Many Regulations in International Adoption 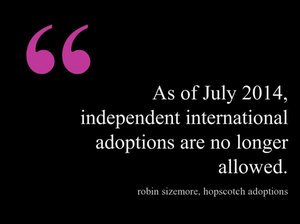 On the Creating a Family show yesterday we received the following question about why there are so many regulations with international adoption compared to domestic adoptions.

Why are there so many regulation for international adoption and so few for domestic adoption. We’ve done both within the last 2.5 years and the comparison is almost comical.

The Universal Accreditation Act took effect on July 14, 2014.  What is basically means to adoptive parents is that from now on they must use a Hague accredited adoption agency and will not longer be able to adopt independently. This is nothing new if the country is a Hague country, but will likely increase the costs and potentially the hassle of international adoptions from non-Hague countries. The UAA will apply even if the placing country limits the involvement of adoption agencies and applies even to kinship adoption.

Keep in mind that it will also add the protections of the Hague Intercountry Adoption Treaty to those adopting from non-Hague countries.

Why So Many Rules

Adoption lawyer and Chief Operating Officer of MLJ Adoptions, Nicole Skellenger, pointed out on the show that one of the reasons for more regulations in international adoptions was the involvement of four sets of laws vs. one set of laws for domestic adoption. International adoptions must comply with state law, US federal law, the placing countries laws, and international law. Domestic adoption must comply with only state law.

While I agree with her, I think it goes deeper than that. The US government has less control and less trust over international adoptions, and perhaps with good reason.

If you are planning on adopting internationally from a non-Hague country you really must listen to this show. Our other guest was Robin Sizemore, Exec. Director or Hopscotch Adoptions.