The Primal Wound-Interview with Nancy Verrier

Dr. Marcy Axness, an adoptee, childhood development specialist, and author of the book Parenting for Peace, shares with us an interview she had with Nancy Verrier, author of The Primal Wound: Understanding the Adopted Child. 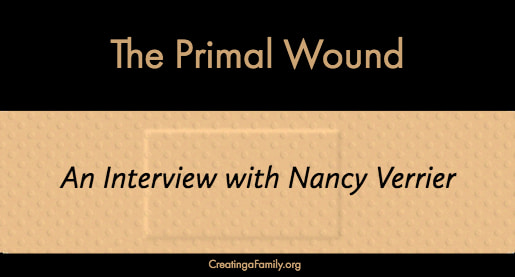 Adoption, A Different Kind of Relationship

An interview of Nancy Verrier by Marcy Axness, PhD

Nancy Verrier is an adoptive mother, therapist and author of the groundbreaking book The Primal Wound: Understanding the Adopted Child. In a two-part interview, Nancy shares her views on a variety of adoption’s “hot topics,” but all emerge from a basic theme: adoption creates “different kinds of relationships.”

MA:     I’m reminded of a speech by actress Tyne Daly at the end of a TV movie (which was about another kind of parenting change-of-course) about how she had planned a trip to Italy but ended up in Holland instead… and how it wasn’t until she stopped pining for the Sistine Chapel and gondolas that she was able to notice and appreciate the unique pleasures of Holland—a different kind of place.

NV:     I have talked to a lot of adoptive parents and many of them are so open to hearing this. They just really want to know what to do for their children, and they can hear me when I say, “You know, you’re never going to take the place of that birth mom. You have to have a different relationship. And if you have a different relationship, it relieves the child of having to guard that so tightly, and you can have a real relationship with him or her.”

MA:     So if the adoptee senses that you’re trying to come in and replace the birth mother, it’s like they—

NV:     —hang on for dear life. Yes. I sensed that, and I finally came to the understanding myself that I couldn’t take her place. I mean, we’re told we’re taking that place, we’re the mothers, we’re it, that’s what we’re told. And at that time, when we adopted our daughter, I believed it. And when I finally came to the conclusion years later that this wasn’t happening and this wasn’t going to happen [me replacing her birth mother], I didn’t ever say anything to her, but there was a sense that she had that my attitude had changed, and it made it much easier for us to relate to each other.

What I hear so many times from adoptees when they have reunited, it’s that feeling of “Ahhh.…” There’s something about feeling relaxed around the birth mother, where they did not around their adoptive mother. And I can see it in my own daughter, I can see her relaxing in the presence of her birth mom. She and I have a wonderful relationship, but it’s different. And it’s different from my other daughter’s relationship with me.

NV:     Yes. I mean, there’s just a level of comfort that does not exist for my adopted daughter.

MA:     See, and my feeling is if we could just admit that, say it out loud, then the adoptive parents are in such an incredible position to really love their child, actively. If they can get that piece, then they can’t help but feel empathy for their child’s experience of loss and separation.

One adoptive mother I know, whose sons feel allowed to talk about all their feelings, including sadness about losing their birth mothers, puts it this way: “I don’t lose standing. I gain standing. I emerge a hero in the eyes of my children. I emerge as trustworthy, stable, sure.”

MA:     And also what I believe happens with adoptees when their parents won’t affirm for them the truth, that they have lost a crucial connection, is that they also become disconnected from their own inner truth, which is so devastating.

NV:     Yes. When adoptive parents say, “I don’t know why my kid lies,” I say, “Well, look—she is living one of society’s biggest lies: You belong in this family.” It’s very confusing. A lot of things that felt like inner truth to her is denied on the outside, in the family and in society in general, and so she begins to be very confused about “What is truth and what is not?”

MA:     I see lying as one way of “acting out” that inner experience. When I was young I used to lose things, and throw good things away—perfectly good things, like my camera case once, just threw it away because I didn’t need it at that time. And then I got into shoplifting. So, as I see it, I was acting out my experience, relative to myself—feeling lost; relative to my birth mother—having felt thrown away; and finally, ultimately, relative to my adoptive parents, having felt stolen. Of course I can understand rationally the very valid reasons for my adoption, and yet there is still that primal, and very real, part of myself that felt all of these primitive things.

NV:     Absolutely. I was talking to some people who wanted to know, “Why do adoptees steal and then lie about it?” And I say, “Well, those are sort of two separate things, but they’re also connected to the same idea: Having felt stolen, and the lies that we perpetuate about who they are and where they belong.”

You can hear more of Dr. Axness and how she understands the primal wound of adoption in this interview on the Creating a Family Radio Show/Podcast.

Nancy Verrier can be reached via www.NancyVerrier.com.

Marcy Axness, Ph.D., is the author of Parenting for Peace: Raising the Next Generation of Peacemakers, and an expert in the primal issues involved in adoption. Dr. Axness has taught prenatal development at the graduate level and has a private practice coaching parents and “pre-parents” around the world. She is currently reissuing many of her past articles. Here’s the link to the introductory post in that series, where folks can sign up to be notified of each new article: