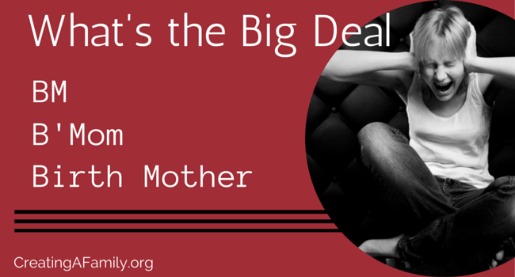 I love the Creating a Family Facebook online support group. Most of the time we are a harmonious group, but we have our moments, and no issue has been more contentious than whether or not we should use the abbreviation BM to refer to birth mothers. Oh my, do those two letters ever raise a ruckus! So much so, in fact, that we had to establish a new rule, and I resist setting rules.

I hate the whole PC movement where people are afraid to talk for fear of insulting someone because I think it works directly against the point of “support” and because I find a hyper-focus on correct word usage to be beyond boring and a real conversation killer. However, this abbreviation in particular has become a hindrance to discussion so must be addressed.

However, before I lay down the law, I want to be very clear that it is not appropriate to point out incorrect usage in a post when someone is in pain and seeking advice. That is hijacking a thread in the worst possible way. There is a time and place for education, and that is not it.

The online world is full of abbreviations and often overlapping ones. A quick search on Acronym Finder found 140 meanings for the acronym BM.  (Knowing about this finder is one of the perks of online support group moderation.) In addition to the obvious reference to human defecation (also known as poop in my house) and birth mother, it can also mean bookmark, Bob Marley, background music, breast milk, and my personal favorite—Bloody Mary.

Truthfully, there is seldom any confusion because given the context of what is being discussed, it’s usually clear what it is meant. As in: “After moderating the debate on the Creating a Family support group about whether BM is an appropriate abbreviation for birth mothers, I was really looking forward to a nice big BM.” (OK, maybe not so clear.)

Regardless of the lack of confusion, this issue is one of basic respect. It doesn’t really matter whether you see it as offensive or if a birthmother you are close to is not offended or even uses the abbreviation BM to refer to herself. What matters is that a substantial portion of birth mothers do find it offensive to be referred to by the same abbreviation that is used for defecation. If you have a choice to offend or not offend, and the imposition on you is simply to type a few extra letters, the obvious choice should be to not offend.

What we deem offensive changes with time. Back in the day, the term “colored” was not perceived as offensive when referring to blacks. In fact, it was in common use by both whites and blacks (note the use in the organization NAACP). But that changed. You would be a dinosaur to refer to a black person in 2015 as “colored”.

I had an elderly relative that simply refused to stop using the word “colored” to refer to African Americans because she said she “didn’t mean offense”. She had grown up using it, the blacks she knew used it, and so she saw no reason to change. Further, she said, her intent was pure because she meant no disrespect. Truth be told, her use of the word “colored” embarrassed me. Times had changed and she hadn’t. Finally, one day in exasperation, I asked if it would be OK to call her a “honky”. She said of course not because that was a rude term.

My point, I said, exactly.

While I don’t have a way of knowing exactly if the majority of birth mothers feel that the term “BM” is rude, it does seem from my experience that a substantial number do. If that’s the case, then we need to weigh it against how much trouble it would be for us to honor their wish. In this case, typing a couple of extra letters isn’t really asking much. So why wouldn’t we?

And please, for the love of all that is holy, don’t start sending me messages about all the other terms that we should also ban. For now, let’s just agree to try to type “bmom” or “birthmother” and get back to talking about what really matters—how to work together to be the best parents possible to our kids.

We have added the following to our group rules:

The abbreviation “BM” or “bm” is offensive to many birth mothers; therefore, in this group we use either “bmother” “bmom” or “birth mother”. If someone uses “BM” in a post, the group moderators will try to catch it and decide if it needs to be addressed. There is no need for others to be the word police, and post their correction.

Do you agree with our new rule?