How Did People React When Told You Were Adopting Again? 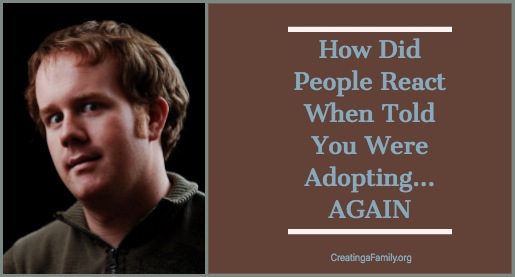 When this question was posted on the Creating a Family Facebook Support Group, in addition to a few congratulations, our community reported hearing the following:

Lots of people think they know best how we should create our families. Without a doubt, they know you should stay in fertility treatment because this next cycle is bound to work. Or they know you should “just adopt”. They know that your children should be spaced two years apart (or is four years the optimum spacing). Heaven help you if you decide to adopt a sibling group or a child with special needs. “Are you crazy!!”

I have no idea what it is about family building that brings out the busybodies, but it does. Everyone seems to be an expert regardless of how little they know.

Not Limited to Adoption

I don’t think this “sticking your nose into someone else’s business” is limited to adoption. I suspect plenty of people have opinions about pregnancies that they think can’t be afforded or are too soon or too many, but they don’t say anything because it’s a done deal. The die has been cast so to speak. With adoption, they still feel like they can change your mind, so they feel free to share.

Lack of Understanding of Adoption

Lack of a Canned Response

People in our lives often don’t have the socially prescribed words – a canned response – to respond when told that someone is adopting again. The socially acceptable response to “I’m pregnant” is “Congratulations.” Period. Not:

“Have you considered the alternatives?” or

“What in heaven’s name were you thinking!”

Simply: congratulations. Society doesn’t have an ingrained response to “I’m adopting”. This lack of a canned response opens the door to a lot of “open mouth, insert foot” moments.

Did you find a lack of response or a negative response when you announced you were adopting a second child or a first child?