Stepparent adoption is the most common type of adoption in the US– over 100,000 children are adopted by their stepparent each year. For something so common it’s surprising that there are so few resources for helping parents navigate some of the unique issues in stepparent adoptions. 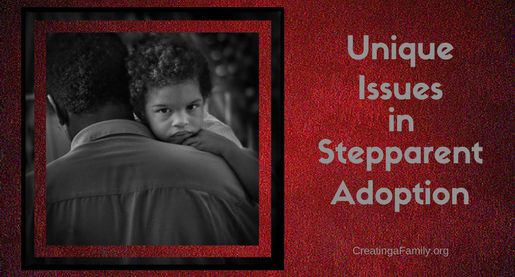 While stepparent adoptions have a lot in common with traditional adoptions (where neither parent is genetically related to the child) there are some major differences that raise some unique challenges.

Many parents in families formed through stepparent adoption tend to downplay the adoption aspect of how their family was formed. After all, one parent who is genetically connected is raising the child, right? This parent can easily answer any questions the child has about “where they come from”, right? The child’s birth parent was not involved and can be easily replaced by the person who is willing to step up and be a real parent, right? Well… yes and no.

It’s true that one genetic parent will raise the child and this parent can answer some of the child’s questions, especially those questions about the child’s early life and that parent’s side of the family. It’s also true that usually the stepparent that is adopting is well known by the child and is already functioning in the role of parent. However, on another level, this is also a form of adoption bringing with it some of the identity and loyalty issues common to all types of adoption. The difference is that parents in traditional adoptions are prepared (I hope) for these issues and parents in stepparent adoptions are very often not.

In traditional adoption, the existing family unit is usually the parents with the child being the newcomer to the family. In stepparent adoption, the existing family unit is the parent and child with the interloper being the stepparent. Neither way is inherently good or bad, but it helps to realize this dynamic at the beginning.

Stepparent adoptions usually involve the blending of two firmly established family cultures. This can be beautiful or messy– and is usually a bit of both. Successful blending requires lots of talking amongst all members of the family and flexibility on the part of both parents. If the children are old enough it is helpful to start the tradition of a weekly family meeting. Also, don’t forget the importance of one-on-one time between the genetic parent and the child.

Talking about the Birth Parent

In traditional adoption, we stress the importance of talking about birth parents because we know that children have questions and are often struggle with a sense of divided loyalty and may be afraid to talk about their birth parents without encouragement. This encouragement often does not happen in stepparent adoptions.

In stepparent adoptions, usually, the birth parent has not been active in the child’s life prior to the adoption. Many parents view the adoption as replacing this absent parent. Delete one absentee father/mother, replace with a present one, and voilà a new family is born.

As parents, we may want to believe that our new family unit will be enough, that since we are providing our child with two parents they will not think about the parent that “was replaced.” This is seldom the case. Most children think about and have questions about their birth parent.
~Why was he uninvolved?
~Why did she leave?
~What was he like as a kid?
~Do I have half siblings?
~Does she miss me?

They have these questions even if they are not sharing them with you. Do your child a favor and give them permission to wonder out loud about their birth parent. And as the parent, it is up to you to bring up the subject because children have an innate sense of what topics we want to avoid.

I always have thought that one of the hardest parts of parenting is putting our kid’s need first. I’m all fine and good with that in theory, but oh boy, it’s hard when their needs do not align well with my own. Parents in families formed through stepparent adoption are in just such a position.

Most children want to think positively about their parents. They want to love them and be loved back, even if their parent has been absent, or is a lousy spouse/partner, or is a jerk, or is an addict or…. By around age 10 or so children also begin to understand that half of their genes come from this person and that some of their traits, personality, strengths, and weaknesses come from this person. If their parents believe that this person is a jerk/irresponsible/awful, what does this say about the child who is carrying half his/her genes?

While you don’t have to gloss over the reasons why this parent relinquished his/her parental rights, it’s important to also share some of the positives about them. At one point you very likely found them appealing enough to create a child, so harken back to those times and remember what attracted you. 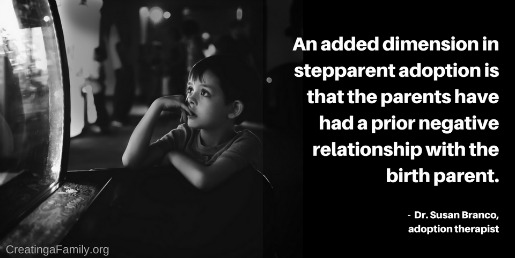 Traditional adoptions encourage some degree of openness between the adoptive family and the birth family because research has shown that this is good for children. Openness can take on many forms, but the general idea is that is it best for the child to not erase the existence of the family that gave birth to them. The same holds true for stepparent adoption.

Openness can involve sending pictures and emails to FaceTime/Skype to visits. If it is not possible or advisable to maintain contact with the birth parent, would it be possible to have some openness with his/her extended family? Would his/her parents like to still be considered as grandparents? Any type of contact would facilitate the child being able to ask questions and learn about this side of her genetic history.