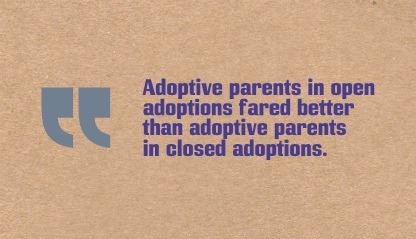 The Minnesota / Texas Adoption Research Project (MTARP) is a longitudinal adoption research study that focuses on how open adoption affects adopted children,  birth mothers, and adoptive parents.  It was national in scope and followed participants for over 20 years.  It is the largest adoption study of its type involving over 720 individuals (190 adoptive families and 169 birth mothers). Participants were interviewed and visited at several times during the study.  Some of the highlights of this study are as follows:

Adopted kids between the ages of 4-12 scored within the normal range on self esteem. Average levels of self-esteem did not differ by level of openness in the children’s adoptions.

Adopted adolescents were as well adjusted as non-adopted teens.  The level of openness by itself was not a major predictor of adjustment outcomes.  However, the degree of collaboration between the adopted and birth parents and the adopted parent’s perception of the child’s incompatibility with the family were predictive of problematic adjustment.

Differences in degree of preoccupation with adoption were not related to the level of openness in the adolescent’s adoption.

Birthmothers in open adoptions had lower adoption-related grief and loss than those in confidential (closed) adoptions. There were no significant differences by openness level associated with birth mother regret about the decision to place.

Birth mother mental health was not related to open adoption or frequency of contact.