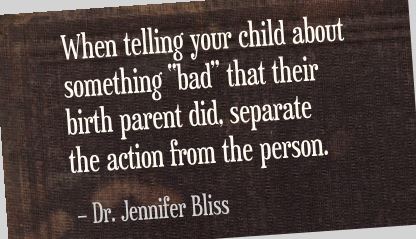 We received a question asking if adoptive parents had to pretend to respect birth parents who had harmed their adopted child or were all around lousy parents. I asked the question on yesterday’s Creating a Family show on Talking with Adopted Kids about Birth Parents.

Separate the Person from the Action

It’s true that sometime our children’s birth parents have hurt them through abuse, neglect, or pre-natal exposure to drugs or alcohol.  We adoptive parents would do anything to protect our kids, and like every other parent, we are inclined to dislike anyone who may have hurt our child. The problem is that the people we are inclined to dislike are the people who gave birth to the child.

We find ourselves caught is a bit of a bind: we know our children may identify with their birth mother and birth father, so we need to  speak well of them, but we strongly dislike them for what they have done. Walking this line is not always easy.

Both of the adoption social workers on our show yesterday, Dr. Jennifer Bliss, with Independent Adoption Center, and Danielle Goodman, with Adoptions from the Heart, said that it was important to separate the person from the action. Whenever talking to our children about things we wished their birth parent had not done, our first step is to make sure that our language is about the act, not the person. No child wants to believe they come from bad people. Sage advice! You really should listen to the full show.

Topics Covered on the Show

We covered the waterfront of talking about birth parents on the show, including:

Has it been hard for you to respect your child’s birth parent when they hurt your child or when they make poor life choices? How do you talk to your kids about them?