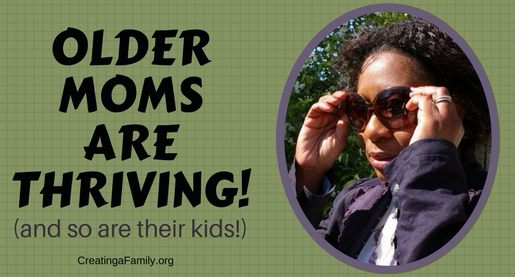 This is for all the older mom’s out there—the ones who dread sleepovers because they can’t stay up that late, the ones who worry how they will handle teenage and menopausal hormones at the same time, the ones who on occasion plug their kid into the iPad so they can take a nap. Despite all our worry and the nay-saying of others, according to recent research it turns out we’re doing pretty darn good—in fact we are thriving.

Everywhere you look you see 40-something year olds pushing strollers, chasing toddlers, or attending kindergarten orientation. Older motherhood has become more and more common as women wait later to start their families, and I know first hand about both the joys and anxiety of being a mom to pre-schoolers in your 40’s. Granted, I became a mother for the first time fairly traditionally in my mid-20’s, so I got to bypass a lot of the “biological clock of doom” commentary. But my youngest two children entered our family when I was 40 and 43 respectively, following a size-able gap in years since the birth of our last biological child.

There’s no escaping the fact that I am “of a certain age” with young kids and thus with lots of worry and questions. Could I “keep up” with the little ones? Can I give them what they need? Will they suffer from my slower inclinations to step in for them and not hover quite so attentively? Will picking my battles differently this time around create entitled brats? Will I even have enough energy to care?

The long years ahead of IEP’s, flute lessons, PTA meetings, and driver’s ed classes are stretching out in front me, taunting me with the anxiety of it all. Sometimes I worry that parenting in my “advanced maternal age” is negatively impacting my younger kids. I’m so relieved, and I think you will be too, to read the recent research. It puts my worries – at least most of them – in perspective.

Despite the scads of research on the medical risks and fertility challenges of having a baby at an “advanced maternal age” (35 years old or older), the trend in the United States is clear. Women are waiting longer to start their families. The medical terminology is “elderly multigravida,” but really, who wants to be called elderly at 35? Not me! We’ll stick with “advanced maternal age,” thank you very much. A report released by the National Vital Statistics Reports in January shows a significant rise in the birthrates for women ages 30 through 44, the highest numbers in that age group since the 1960’s baby boom era.

So women are having babies later. What are the outcomes for the moms? How are they, and most importantly, their children faring? Well, when you look at the research that surrounds those questions, some interesting information emerges.

In the earliest studies of these questions, the results of the research were somewhat troublesome . When looking at cognitive testing of the children of older mothers, the children were testing significantly lower than children of younger mothers. However, when recent studies were released, those outcomes were reversed. Scientists wanted to know why.

One of the significant changes uncovered in recent studies  is that older moms are more likely to take better care of themselves, and can take advantage of the resources they’ve built into their lives to do so. In decades past, those women who were “still” having children well into that “advanced maternal age” of 35 or later were also likely to be women who had had many children. It’s likely that those women were in the lower or even poverty-level economic brackets. The stress of being financially strapped carries into a woman’s health. In recent studies, the older mothers studied now are much more likely to be educated and financially stable. They have the resources to take care of themselves now. See? The advantages to that healthy bank account and great little house you have worked so hard for will likely contribute to reduced emotional stress and anxiety, which is better for both you and your child.

Dr. Alice Goisis, a research fellow at the London School of Economics and Political Science and the Max Planck Institute for Demographic Research in Germany, and a lead author of that study says it this way, “These women tend to be advantaged” and added the important note that older moms in the study also tended to take better care of themselves during pregnancy. For example, they had decreased incidences of smoking while pregnant. Interestingly, they were also more likely to breast-feed their babies, when compared to the younger mothers.

In another study out of Denmark, from December 2016, it appears that the actual “advanced maternal age” itself is another factor contributing to older moms’ success. That study found that the older mothers were more patient in their correction and training of their children and less likely to have “behavior problems” with those children.

You’ve heard the old adage “With age comes wisdom.” You’ve learned the necessary wisdom to handle life’s unexpected, tough situations. With age comes a degree of experience that says “don’t sweat the small stuff” with which younger moms may struggle. You’ve learned how to “let it go.” (Sorry for that earworm, but really, it applies so well here.)

“Older mothers seem to thrive better,” said Tea Trillingsgaard, an associate professor of psychology at Aarhus University in Denmark, who was the lead author on one of the studies. “The mothers have more psychological flexibility, more cognitive flexibility, more ability to tolerate complex emotional stimuli from the children.” So while your little one is keeping you on your toes all day long, remember that you are well equipped with all of your (ahem) life experience to handle the illogical toddler negotiations and the irrational tantrums over blue cups vs. green ones that he throws at you, along with those fistfuls of crackers. Wholegrain crackers, of course.

The Kids of Older Moms are Doing Well

When you have mothers who are better equipped, both emotionally and financially, for the difficulties of parenthood, AND moms who are taking better care of themselves, physically and emotionally, the recent studies also show that the children benefit. Children of older moms scored higher on cognitive tests. They have fewer behavioral, emotional, or social issues. We’ve already discussed that they are tended to with more patience and nurturing in discipline and correction. The outcomes of these research projects were clear: kids thrive when their mothers thrive. And older moms are thriving today. It seems a fairly logical conclusion but it bears stating it that clearly. Especially if you’ve come to motherhood through a long, circuitous route full of hard work, longing, patience, invasive fertility treatments, and more patience. Revel in the fact that your “advanced maternal age” isn’t just good for you. Apparently, it is really good for your kids too. And what mom doesn’t want to know that she’s doing right by her kid?

P.S. Even with this good news about how older moms and kids are doing, it’s still important to remember that each year you wait past your early to mid-30s makes it harder for you to become a mom. The biological clock is real.

Are you an “older” mom? What are your worries?