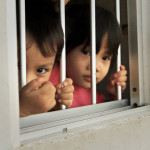 I, like the rest of the online adoption world, had heard of the new documentary, Stuck, on international adoption that is being released today. So when I received notice that the New York Times had reviewed this film, I immediately stopped what I was doing to read it.

Umm, I guess she didn’t like it. This review was in such stark contrast to the trailer I had seen and the buzz I was hearing that I did something I’ve never done before. I called up Both Ends Burning, the foundation that produced it, and asked for a review copy. After seeing it, I begged to shuffle around the Creating a Family show schedule for the coming week (also something I almost never do because it makes our producer very cranky), and invited Craig Juntunen, the founder of Both Ends Burning and Executive Producer of, and heart behind, Stuck to be this week’s guest.

What I Thought of Stuck

My first reaction to Stuck was to wonder if the NYT reviewer and I had seen the same movie. Stuck is many things, but not a sales pitch for international adoption. If anything, it paints too bleak a picture of the difficulties of adopting from Ethiopia, Vietnam, and Haiti, and by extension makes it seem that all international adoptions are equally fraught with such heartache.

I loved Stuck, and thought the NYT reviewer went out of her way to feign a too-cool-to-be-moved attitude, but I agreed with her in part.

“[W]hile it’s hard to concentrate on systemic problems when faced with the rotting teeth of an adorable Vietnamese orphan, it’s those very problems that require our most intense scrutiny.”

She is right that the systemic problems of the orphan crisis and with international adoption should require our most intense scrutiny. These problems are complex, and all solutions are fraught with hazards. It’s such a balancing act between finding families quickly for the kids that need them, but not encouraging parents to relinquish children that they could possibly raise; between providing help for birth families and being respectful of cultural differences. And how in the world can we design a system that discourages fraud when we are infusing often very poor countries with huge amounts of money from hopeful adoptive parents. I’m convinced that international adoption has a role to play in worldwide orphan care, although I hope it is not a starring role. Those of us who care passionately about keeping international adoption as one option for children without parents must be vocal proponents of the other in-country options for these children. I was chomping at the bit to talk about all this with Craig Juntunen.

My Interview with the Producer

While Craig engaged with me in talking about the balancing act we walk in providing the best care for children whose parents aren’t able, he kept coming back to the need for raising awareness. It hit me about half way through the interview that he was right. When you are immersed in the world of orphans, like I am, it is easy to forget that not everyone is aware of the problem. The goal of Stuck is to raise this awareness.

Stuck was never intended to be an analysis of the complexities of caring for orphans. Stuck’s goal is to graphically and poignantly illustrate that the system we currently have is broken. It succeeded. The system is indeed broken, and Stuck is a great vehicle for driving this point home.

I look forward to the next step of trying to develop solutions to the orphan crisis, but here’s where the NYT reviewer was dead wrong—we should absolutely keep the faces of toothless orphans in mind when we seek these solutions. Their faces should in fact be our guiding light. If you’ve seen it, what did you think?

Listen to my interview with Craig Juntunen. You can also download it and/or add it to your RSS feed. A list of topics we discussed is below.

After our interview Craig invited me to join him for the Q and A session after the screening of Stuck in Charlotte, NC. If you are within driving distance of Charlotte this Sunday, March 3, please join us at Northlake Mall. The movie starts at 7:00, but the festivities begin at Bravo Restaurant at the Mall at 5:00 with free professional family portraits. I would love to have you be part of the discussion after the showing. Oh, and please introduce yourself to me. Meeting our online community is one of the highlights of what I do, and it happens too seldom for my taste.

If you aren’t near Charlotte, check out the rest of the Stuck tour to see if they are coming near you. If you can’t join one of the tour showings, you can also buy a DVD of Stuck.

What Craig and I talked about on the Creating a Family Show: