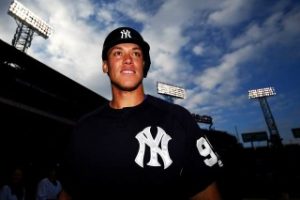 New York Yankees’ rookie, Aaron Judge is making headlines this season. With his astounding home-run record, good looks, and humble attitude, fans are going crazy over this young star. What remains consistent from even his earliest playing days is how he deftly turns the attention off himself and onto the role his parents, Wayne and Patty Judge, have played in getting him to this level of play and headline-making success. He’s particularly clear that his mom has been a major influence in the man he is today.

While Judge possesses a hulking build that appears to have been stripped from the pages of a comic book, his mother, Patty, represents the true strength behind the slugger. Judge said that his mom has influenced every decision that he has ever made, describing her as an incredibly caring individual.

“I know I wouldn’t be a New York Yankee if it wasn’t for my mom,” Judge said. “The guidance she gave me as a kid growing up, knowing the difference from right and wrong, how to treat people and how to go the extra mile and put in extra work, all that kind of stuff. She’s molded me into the person that I am today.”

The Judges brought Aaron home from the hospital and adopted him the day after he was born. Both of them are teachers and have always prioritized education in the lives of their children. Aaron’s older brother John, also adopted, is now an English teacher in Korea. They stressed hard work, respect, and family. It’s paid off in spades, as their son is already being compared to another Yankee-great who is known for his personality, character and respectful demeanor – Derek Jeter.