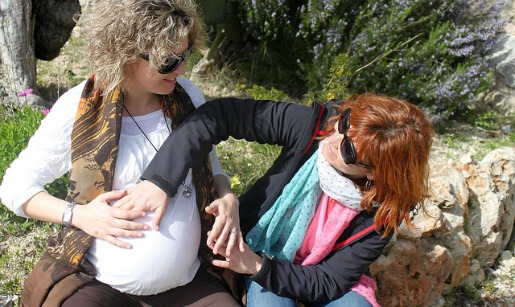 It is common practice in domestic infant adoption for expectant parents to meet with prospective adoptive families, choose the family they want to parent their child, and very often continue a relationship both pre and post adoption. Many adoption agencies and adoption attorneys also have a “giving ceremony” where the birth family gives/entrusts the infant to the adoptive family to love and raise.

Should Adoptive & Expectant Parents Get to Know Each Other

The practice of allowing expectant parents to meet and form a relationship, maybe even a friendship, with the adoptive parents pre-birth evolved in the last 10 or so years. It was seen as a win/win/win for all sides of the adoption triad.

Baby entrustment or giving ceremonies were begun as a way of symbolizing the trust that birth parents were putting in the adoptive families. Both families would see the love that they shared for this child and the adoptive family could see the grief experienced by the first parents. It is hoped that these ceremonies will provide healing closure for first families for the decision they had made. The pictures would serve as a visual reminder to the children of the shared relationship between their two families.

But is it really good for all involved?

Are friendships/relationships between prospective adoptive parents and expectant parents coercive and maybe even a little manipulative putting undue pressure on the expectant mom to not change her mind about placing her child for adoption?

Is the baby-giving ceremony a little creepy–like giving or selling a child? Is it torture for birth families and hurtful to adopted people with the over-focus on all the excitement and joy felt by the adoptive families?

These were issues that Dr. Marcy Axness, an adoption therapist and adult adoptee, covered in an interview she did several years ago with Nancy Verrier, author of The Primal Wound: Understanding the Adopted Child. This is the second part of the interview. You can read the first part at our blog: Should Adoptive Parents Be in the Delivery Room. We had over 180 comments on that blog and the discussion was mind expanding– I highly recommend. I’m looking forward to the discussion on this one.

Marcy Axness: A colleague of mine is not in favor of having a pregnant woman who is contemplating adoption, establish a relationship with prospective adoptive parents.

MA: She feels that the expectant mother’s work at that time is to really be thinking about how she is or is not going to be able to parent this child, and what shouldn’t enter into it are any thoughts about how great these people are, they’ve got so much more than her, etc.

NV: Or that they’ve gotten into such a close relationship that she can’t possibly tell them no. That she owes them that baby. No, I have changed my mind 180 degrees about that. There was a time when I thought it would be better for the baby to have heard the voices of the adoptive parents, and have the baby-giving ritual that some people talk about, which [adult] adoptees just absolutely abhor. I’d been trying to find a way that maybe somehow, unconsciously, that baby would have a better feeling about it if there were a ritual around it. But adult adoptees have pointed out to me that it seems like a ritual sacrifice, and they are the ones being sacrificed.

So I have changed my mind about that. I think it would be just for the adults, not for the baby at all. And it isn’t even for all the adults. It’s only for the adoptive parents, because the birth parents, if you’ve ever seen them at any of those rituals, are absolutely in agony.

MA: Speaking as an adult adoptee, when you mention those adoption rituals, it does make me squirm. It seems like something good to do, and yet it somehow rubs me the wrong way. Like it’s all about this miracle, this joy, and nothing is mentioned about the great losses involved.

NV: And isn’t that what most everything has been? That’s why my book was such a bombshell for some people because I did tell about loss. Every other book that I’ve ever read would touch on the abandonment, they would touch on that wound, and then back away really quickly from it.

So, what do you think? Beneficial and humane vs. coercive and cruel? Or somewhere in between?

P.S.#1 Creating a Family had many resources on the primal wound theory put forth by Nancy Verrier in her book. One of the best was an interview I did with Dr. Marcy Axness and blogged about at What Adoptive Parents Needed to Know about the Primal Wound.

P.S.#2 Nancy Verrier can be reached at NancyVerrier.com. Marcy Axness, Ph.D., is the author of Parenting for Peace: Raising the Next Generation of Peacemakers, has taught prenatal development at the graduate level and has a private practice coaching parents and “pre-parents” around the world. You can find her at marcyaxness.com.

P.S.#3 If you’ve found this blog thought provoking, please share with others using the Share Buttons below (or the old fashioned way–cut and paste).