Our online support group moderator, John, is at it again! We appreciated his thoughts on Shazam! so much that we jumped at the chance to share his movie review of the recent X-Men feature, out in theaters now. 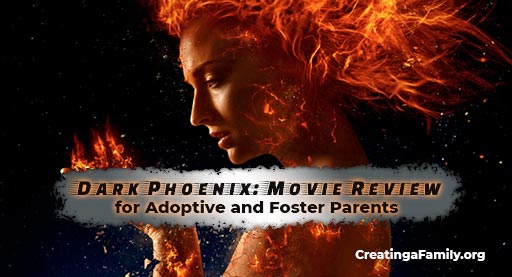 Well, I just saw another super-hero movie. This time, it was Dark Phoenix, an X-Men film and reportedly the final one for a few years. I’m sharing my movie review here because the adoption themes came as a surprise to me – the characters in the X-Men comics didn’t have that type of relationship.

In my view, there are a few critical elements for parents to be aware of: a child rejected by her birth family, a child feeling like no one will ever stay with her – even as an adult, and a betrayal of sorts by the adoptive father. These might be triggers for an adopted or foster child. There’s also a strong theme of unconditional support that helps the main character pull through in the end.

Warning: my movie review does contain a few spoilers. If you want to see the film without knowing what is going to happen, stop reading here!

Jean Grey, the main character is shown to have caused her mother’s death when she was only eight years old, as a direct result of her powers appearing for the first time.  She changes the radio station and then demands quiet, which causes her mom to fall asleep at the wheel. There is an accident which kills her mom and appears to kill her dad as well. Professor Xavier takes her in basically as her adoptive father and raises her in the mansion, training her to be a soldier. His “adoption” of her becomes very messy because it turns out later in the movie that her dad is alive. But he has feared his daughter and her powers ever since the accident that claimed his wife’s life. He’s tried hard to forget she ever existed and even persuaded Xavier to hide the truth of his survival from her.

Jean’s tumultuous childhood and understanding her supercharged powers lead to a sort of personal breakdown – in turn, that leads her to accidentally kill one of the X-Men with whom she had been close. Throughout the story, Xavier reminds her that he told her back when she was eight years old that she is not “broken.” He assures her that she is just different from her peers and that she shouldn’t worry if she breaks stuff when her powers manifest. He will help her fix it. I thought this was a good theme for kids in foster care. He shows her that he never really gives up on her even when others do. One particularly triggering point in this storyline is when the villain tells Jean she is the one that everyone leaves. As an adoptive dad, I know this would resonate with at least one of my kids.

In the end, Jean’s boyfriend and Xavier, her father figure, never give up on her and she dies saving everyone. Although, I might have caught a hint at the end that she actually survives. Time will tell! Sadly, her birth father never resolves his anger towards her over the accident. He comes across very badly in the storyline.

Because of the triggers mentioned earlier (abandonment, rejection, unresolved father issues), I would recommend waiting until this comes out as a rental if you have fostered or adopted children.  Fair warning, there is also a lot of violence and killing by characters who really shouldn’t have been killing. Surprisingly, there was also a key character killed off as a point of warning for you.

Overall, I did enjoy the movie. As a long-time comic book reader, I especially enjoyed the nods to the comics that were included in the storyline. However, I can certainly see why many didn’t enjoy the movie.

For those interested in the Marvel movie franchise, this was the 2nd to last Fox Marvel movie before Disney’s takeover. There is one more coming out, which will also have adoption or foster themes. It will most likely be called ‘The New Mutants,’ but it’s not yet sure if it will be released to theaters this summer or just held back for the soon-to-launch Disney streaming service in November.

Do you watch movies with strong adoption or foster-related themes before you allow your children to see them?