“You’re Not My Real Mother” 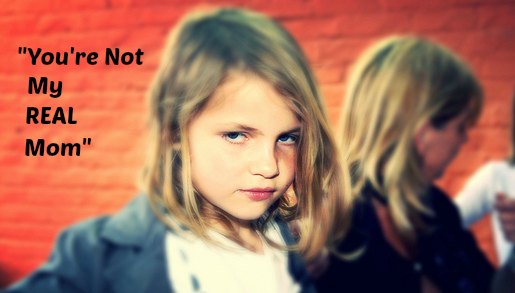 My then sixth grade daughter was invited to a sleep-over party at a hotel with an indoor pool. The divorced dad, who was flying in for the occasion, was giving the party. My daughter and I were both new to middle school.

I didn’t know the child or the parents; I couldn’t get good information about how many adults would stay the night and how the adult and kids rooms would be situated. I yearned for the familiarity of elementary school where I knew most of the families of my child’s friends, or knew someone who did.

My daughter was not the most social of kids, so I didn’t take saying “no” lightly. In the end, I decided to compromise (another word for displeasing everyone equally): she could stay until 10:00, when the pool closed, but then I would pick her up.

My daughter had(s) a volatile nature and struggled with transitions under the best of circumstances; leaving mid-party was close to the worst of circumstances. We talked before hand about how hard it might be to leave, and I clearly stated my expectations for her behavior–no begging, no renegotiating, and no tantrums. The evening, as you would imagine, went the way of other famous best-laid plans.

As the pool closed and the kids were running wild, she started to beg, negotiate and cry. I was sympathetic, but firm. As we entered the elevator, which in my memory was packed with respectable, calm folks who I’m sure were perfect parents, my daughter lost it and started screaming. “I hate you. I wish you weren’t my mother. Any other mother in the whole world would be better than you.”

It was a long elevator ride for all concerned.

The Power of “You’re Not My Real Mom”

Hearing “You’re not my parent” flung at you in anger is a universal fear of adoptive parents or parents that conceive through donor egg, sperm, or embryo. I think it underlies many decisions, including deciding on a closed adoption or deciding not to tell a child they were conceived through donor gamete. And look, I’m here to tell you that it is not a pleasant experience. That evening in the elevator, I was hurt, embarrassed, and furious—in about equal measures.

But as much as this is a universal parental fear, it is also a universal feeling at times amongst kids—all kids. The daughter in the above story is my biological child. Of my four children, she is the only one who had ever said this, but I have no doubt the other three have felt it or will feel it. All kids at some point wish they had another mother. The more intense the child, the more likely they’ll give voice to this sentiment. The difference is that biological kids add “I wish” to “you’re not my mother”, but trust me, it does nothing to lessen the sting.

Truth be told, most parents have harbored similar thought about their darling progeny every once in awhile. I know I have, including that night in the elevator.

Playing the “You’re Not My Real Mom” Card

The existence of another mother, a first mother, no doubt complicates things, but I suspect it complicates it as much, if not more, for us parents as for our children. Being told that we aren’t their mother plays to our secret fear that we really aren’t their real mother, and sadness that we have to deal with this fact. However, I’ve noticed that adoptive parents or parents through donor gametes give more power to this statement than it deserves.

I have seen parents change their position or get sidetracked into an adoption talk once the “you’re not my mother” card has been played. The statement gains power each time this happens, and thus, is whipped out more and more.

Sometimes, of course, this statement is a true reflection of unresolved adoption issues or grief, but in my experience, it is more often a reflection of the typical run-of-the-mill child/parent struggles. No one likes hearing “no”, and every child worth his salt would love to have a weapon to prevent it.

How To Handle “You’re Not My Real Mother”

There is probably no perfect answer to this statement, because expression of frustration and anger don’t really need a response. If you can muster up the energy to lie in the heat of the moment, you could say, “Well, I’m certainly glad I’m your mother.” The best I’ve been able to do is, “That may be true, but it doesn’t change the fact that you are still grounded, or leaving the party, or _______.”

One friend responded to her teen daughter, “Look behind me honey, I don’t see a line of other mothers waiting to take my place.” Another more politically correct friend responded, ‘That’s funny, I sure feel like your mother.” (One can only guess that the irony was lost on her son.)

And all of these mothers, including me, are now very close with the children involved, and as far as I know, all of these children are now quite glad they’ve got the mothers they have.

Parenting is Not a Popularity Contest

I don’t have any amazing words of wisdom to help you avoid your child wishing they had another mother, other than to say it is almost always temporary. Parenting is not a popularity contest. I said this once to my thirteen-year-old son, and I over heard him mutter as he walked away: “Damn good thing too since you’d be losing big time.” He could just as easily have muttered “you’re not my real mother.” Maybe it is deep felt adoption angst, but more likely it is just an angry kid trying to strike back. We both survived, and so will you.