The Other Mother: What life is like with an open adoption 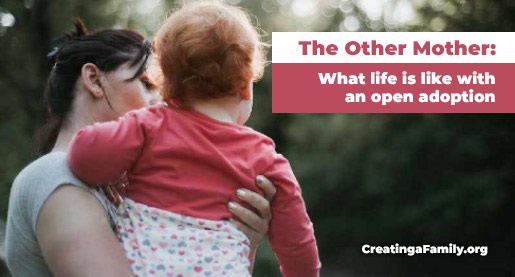 Writer Gina Shaw shared her experience with open adoption and what life is like for her family. The original post was published on The Well by Northwell.

Adoption is Part of Her Story

On my 13-year-old daughter’s dresser sits a photograph in a sparkly rhinestone frame of her as a newborn, wrapped in a pink checkered blanket. Annika is cradled in the arms of two women: a tall, very young blonde woman in a red top — slender but with a belly still slightly swollen from recent pregnancy — and a shorter, older, dark-haired woman in an ivory sweater (that’s me).

We are both Annika’s mothers. Whenever our family goes on vacation, or when she goes to sleepaway camp, she always brings that picture with her. For as long as she can remember, Annika has known that she was adopted, and that Kim, her birth mother, chose us to be her parents. It’s part of her life story, part of who she is.

I Was Afraid Of Open Adoption

For many years, virtually all adoptions were closed, meaning that the birth family didn’t have any direct information about, or contact with, the adoptive family, and vice versa. Some well-meaning people (and some not so well-meaning) thought this preserved “privacy” for birth parents, secured the role of adoptive parents, and ensured that adopted children didn’t feel “different.” To this day, many states deny adult adoptees access to their original birth certificates.

By the time my husband and I were considering adoption in 2005, however, more and more domestic adoptions were open, meaning that birth parents have direct contact with the adoptive family through letters, e-mails, phone calls, and even visits. By 2012, a report from the Evan B. Donaldson Adoption Institute found that 55% of the approximately 14,000 to 18,000 infant adoptions occurring in the U.S. annually are fully open, another 40% are “semi-open” or mediated (meaning that contact goes through an agency or attorney), and only about 5% are closed.

To be honest, though, when we first started talking about adopting a child, I wanted nothing to do with open adoption. In fact, my original thought was to adopt internationally, because I wanted my child’s birth mother to be as far away as possible. Thousands of miles. An ocean or two.

Real talk: I was afraid.

How could I ever feel like my child’s “real” mother if there was another woman in her life who actually carried her for nine months and gave birth to her, someone who sent her letters and photos and maybe even talked on the phone or actually visited? Open adoption sounded absolutely terrifying.

But I’ve always been a reader and a researcher, so as we planned our adoption journey, I dove into books and other resources about adoption… and I kept finding information that challenged me to stop thinking about open adoption, and first mothers, as a threat. In addition to the Donaldson Institute, Creating a Family offered a trove of resources and links to studies that have documented the benefits of open adoption.

An open relationship provides birth parents with reassurance that their child is well and happy, it gives adoptive parents access to information about their child’s family history as well as a sense of security (studies have shown that adoptive parents in closed arrangements are much more anxious about “losing” their child than those in open ones), and it allows adopted children and adults to have longed-for connections to their biological family and roots, as well as important practical information about their medical history.

This was just about the first decision we would ever make for the child we hoped to adopt: would we have an open relationship with their birth family or not? If I couldn’t overcome my fear of “the other mother,” how would I ever be able to overcome other fears and obstacles to do what was right for my child? We decided to pursue domestic open adoption and signed up with an agency.

Over the next year, we went through three “failed matches” — adoptions that fell through at the last minute — and there were days when I curled up on the floor and cried, believing we would never have a baby.

But then, the time came. Kim chose us to be the parents of her baby girl. I’ll never forget the 5 a.m. phone call when she told us that her contractions were five minutes apart, or the wild rush in the rain to the airport, or the warm Georgia evening when we watched Annika take her first breath. My husband cut the cord. Kim held our daughter first, then me, then my husband.

Over the past 13 years, our relationship with Kim has evolved — and so has her relationship with Annika. At first, when Annika was a baby, it was pretty simple. We sent lots of pictures and made lots of phone calls during which Annika mostly gurgled. Kim visited the summer after her first birthday, and we had fun traipsing around New York City with an adorable toddler. In a way, I felt like a (much) older sister or aunt to Kim, who hadn’t had a lot of positive female role models in her life.

As Annika entered preschool and early elementary school, the relationship sometimes felt more complicated. Kim seemed almost like a fairy princess to Annika — a beautiful, bubbly young woman who came to visit sometimes or called on the phone, sent little presents like the treasured stuffed mouse she still takes everywhere, and never ever had to say “no” or tell her to pick up her toys or go to bed when she didn’t want to. Meanwhile, I was by now over 40, chasing three kids under 6 (we had since had two biological children), and not exactly a fairy princess. But on the other hand…  I was the one cuddling next to Annika as we read books at night, walking her to her first day of school, and seeing her jubilant grin when she successfully pushed off on her two-wheeler for the first time.

Now We Let Our Daughter Lead

With the advent of the tween and teen years, we have let Annika take the lead in the relationship. Sometimes she wants to have lots of contact with Kim, calling and texting and FaceTiming. More often, though, she’s so absorbed in her activities and what’s going on with her friends that she drops out of contact for a long while — which should sound familiar to any parent of a teen, adopted or not. To her great credit, Kim is always loving and supportive, sending enthusiastic text messages and posting heart emoji-filled congratulations on Annika’s Instagram when she gets a coveted role in the school musical or makes the honor roll.

And Kim has built a great life for herself too. She’s married now, with a young stepdaughter who often likes to join in on their FaceTime conversations, to Annika’s delight. At first, Annika confessed that she was worried that the little girl would replace her in Kim’s heart, but Kim made it clear that no one could ever do that.

At this point, my husband and I no longer stage-manage their contact and conversations. If Annika wants to ask Kim questions about her biological father, she knows she can. We’ve already had lots of talks about why Kim chose adoption for her, but if she wants to ask her again, she knows she can do that, too. Sometimes she may want to talk to her about boys, or a fight with her best friend, or other thorny teenager things. Way back when we were first considering adoption, that thought might have been scary to me. But now, it’s comforting. I know I don’t have all the answers, and that sometimes there are things a teenager just doesn’t want to talk to mom about right now. As I was writing this article, I asked Annika what her relationship with Kim feels like now, to which she said, “It’s like having an older sister who lives far away.”

Research has also shown that open adoption communication — an environment where a child feels free to discuss their adoption and their feelings about it — is good for children and their families. Children who experience more open adoption communication within their families have higher self-esteem, fewer behavioral problems, more trust for their parents, fewer feelings of alienation, and better overall family functioning.

Of course, the truth is that if you’ve seen one open adoption, you’ve seen one open adoption. There is no rule book for how these relationships are supposed to work. Our close friends include at least three other adoptive families, and everybody does it a little differently. Sometimes it varies even within the same family when there is more than one adopted child and their birth families want different levels of contact. And sometimes circumstances like violence, drugs, or abuse mean that it’s just not safe to have an open adoption.

Do It All for the Good of the Child

But there’s one underlying principle that guides our open adoption and should guide all adoptions, whether closed, open, or in-between: our child is what’s most important. She is the focus of the process. Kim chose us as Annika’s parents, and we chose to adopt her because we all wanted the same thing: to give this wonderful little girl, who is now rapidly becoming a young woman, a happy, healthy life surrounded by love.

Thank you, Gina, for sharing your open adoption story with us.

Do you have a successful open adoption story to share? We’d love to hear from you in the comments.