Holiday Issues in Open Adoption: One Birth Family Gives Gifts & Another Does Not 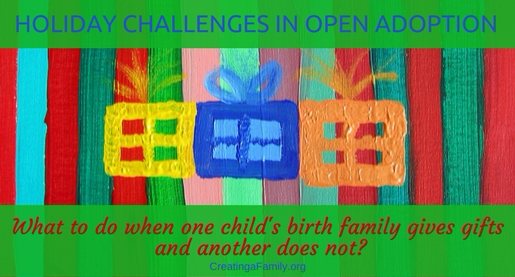 Open adoption relationships during the holiday season can carry extra layers of complexity that may not be present during the rest of the year. In most homes, holiday excitement is running high with thoughts of gifts! and Santa! and cookies galore! The sugar rush alone is enough to make most parents curse the sugarplums under their breath. So what do you do then, when you have a child in your home who get gifts from his birth parent(s) but another child who will get nothing from his birth family?

We received this question in our Facebook Support group and thought it was an excellent example of how flexible and creative adoptive (and foster) parents need to be at this time of year when raising children who come from different birth families.

How do you handle some of your kiddos getting gifts from birth family around the holidays, but not ALL the kids? 2 of my 4 children have gifts from birth family. Which obviously means 2 of the 4 do not. I have contemplated contacting their birth families (who didn’t send anything) and say, “Hey, it would really mean a lot to ____ if you could send a little something for Christmas, even just a card!” But is that weird to basically ASK for a gift? Should I add, “It’s hard on ____ to not receive anything from you when the siblings do get something from their families.” I don’t want to guilt them into doing it, but I also think there’s no way for them to know that 1) it’s ok to send something and 2) it would be appreciated, unless I actually tell them. The only other idea I had was to let the kids who got gifts open them privately vs. in front of the other kids. Help!

Why Birth Parents Don’t Give Gifts: Not Wanting to Overstep

I think my response would depend on the cause. If you think they are trying to “stay in their lane” and not overstep, then certainly, say something about it. Tell them it’s OK if they choose to send something, and that it doesn’t have to be large. You may even give them a suggestion of something small like a matchbox car, fidget spinner, Lifesaver book, or stuffed toy. Try to have the conversation in person if you can. I would likely start by acknowledging that it is awkward, and you don’t want it to seem like you are asking for a present. Explain that their child’s siblings get something and that you don’t want him/her to feel left out.

Why Birth Parents Don’t Give Gifts: Not Able

If you think the birth family is not giving gifts because they are not able (financially, addiction, mental illness, etc.), it seems like you have a couple of options. If you are in communication with them, explain the situation and ask what they would give the child if they were in the position to do it. Then ask if they would be okay if you bought that gift for them to give the child, or for you to wrap and put under the tree for that child. If they prefer it, they could pay you back when you see them next or when they are able.

Another option to consider, if the birth parents are not in the picture or aren’t in a good place, contact a member of the extended birth family (grandparent, aunt, uncle) and explain the situation to them, and again stress that the amount spent isn’t what is important.

Sometimes the involved birth family adopts all the kids in the family. I know of several families where the birth mother or grandmother of one child took all the kids in the family under her wing and gave small Christmas gifts to all children. Of course, as the children get older they will understand that their birth family did not give gifts and this is an opportunity for the parents to talk about differences and specific challenges facing his birth parents.

Keep in mind that for many people the hassle of shipping a gift can be a big impediment, so try to think of a way around this. If you see the birth parent(s) in person, they could either give the gift to the child at that time or give it to you to wrap and put under the tree. If they feel comfortable, shopping online allows for the gift to be shipped directly to you, and you could offer to wrap it for them. Of course, that usually requires a credit card or debit card, so that might also be an obstacle. If none of these options work, then you could try to have the kids who have presents open them separately, but the reality is that as soon as the kids who didn’t get something are old enough, they will be aware of what is happening.

We loved these other creative and open-hearted suggestions offered by our members of the Creating a Family Facebook Support Group.

One family seeks mentors for their children who don’t have involved birth parents and makes sure that the kids get meaningful time with those mentors throughout the year. The mentors and kids exchange gifts to celebrate their relationships and the holiday season.

Another family prepares during the year by talking about the differences between families and how families do things, including holiday celebrations. For the kids who get gifts, they set up Skype visits with the birth family. They reserve that time for the kids to open their presents during that call when the other siblings who won’t have gifts to open are occupied or away from home for the evening.

For the families with older children who are aware of the difference in not receiving a gift, some adoptive parents provide extra gifts to round out the stash of presents and even things out a bit. One parent shared that they allow the child to open the gifts at a different time from the other kids, which also gives space to talk through the differences and feelings the child might have. Another suggested making those “supplemental gifts” be an activity or experience that might be more memorable for the specific child.

A birth mom in the group makes sure to include all of her child’s siblings in all of the holidays and celebrations, to be certain that no one feels left out, saying “It’s about being fair but it’s also just because I love them. They’re my son’s brothers and sister.”

A couple members suggested that the children could create gifts for their birth parents as an expression of care and to communicate that exchanging gifts is acceptable in the family dynamic, without creating pressure that could come of outright asking the birth parent to provide a gift.

What has your family done to work around the awkwardness of one birth family offering gifts and another not giving anything? We’d love to hear your ideas in the comments.