3 Facts about Adoption Fundraising You Don’t Want to Hear 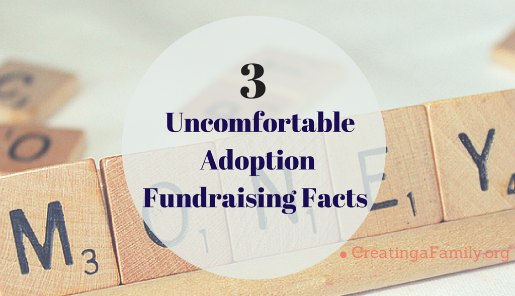 Adoption fundraising is a potential minefield for the unsuspecting. Before you decide to publicly raise money to adopt a child consider the following three uncomfortable facts. They may not be fair; they may not be right; but trust me, they are real. Don’t shoot the messenger.

#1 You will feel tempted to over share your adoption “story”.

Raising money involves selling, and a powerful story sells. You will be tempted to share more of the “hard” facts about your child’s or birth parent’s life to make your fundraising more compelling.

Further, some people who give will feel like they deserve to hear the details. These are not bad people; in fact, they are likely very nice people who care enough to give you money or buy a product they don’t want in order to help you adopt. They probably won’t even realize they are asking for information that you may not want to share. Telling them in so many words that it isn’t their business will not be easy once they’ve given you money.

It’s easy to forget before the child arrives that this theoretical child you are raising money for will become very real once she arrives. She may someday resent that the people in her world know so much about her early story, and you may regret having told.

#2 Your spending and saving habit will be noticed.

If you ask for people to give you money, they will judge how you spend your money. Like it or not your spending and saving habits will be noticed.

#3 You will resent the people that don’t give.

If someone chooses not to give you the money, or buy the product you are selling, or attend or help out at your dinner you are giving, you will likely resent it on some level, and it may very well damage your relationship. I know plenty of people who say they will ask for money and people can decide whether to give or not, but I know of no one that does not notice who gave and who didn’t.

OK, my flack jacket is on. Have at me. Agree? Disagree? Any other uncomfortable adoption fundraising facts you would add to the list? Are some fundraisers able to avoid these three uncomfortable facts?