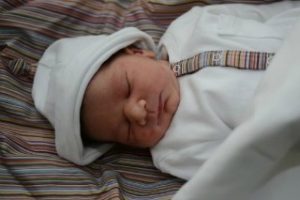 Moaza Al Matrooshi, who is from Dubai, was born with beta thalassaemia, an inherited blood disorder that is fatal if untreated. She needed chemotherapy, which damages the ovaries, before receiving a bone marrow transplant from her brother when she was 9. Her mother requested that her right ovary be removed and cryopreserved (frozen) prior to chemotherapy.

Last year, surgeons in Denmark transplanted five slivers of the ovarian tissue back into her body – four were stitched on to her failed left ovary and one on to the side of her uterus.

Prior to transplanting her ovarian tissue, Moaza was menopausal. After the transplant, her hormone levels began returning to normal and the ovarian tissue matured and began producing eggs. Her doctor said, “She basically became a normal woman in her 20s with normal ovary function.”

Moaza and her husband used in vitro fertilization (IVF). From the eight eggs that were collected, three embryos were produced, two of which were implanted earlier this year. Recently, Moaza, 24, gave birth to a healthy baby boy.

Worldwide more than 60 babies have been born from women who had their fertility restored, but Moaza is the first case from pre-pubertal freezing.