As you know by now, I’m a research geek. Recently I was killing time and procrastinating by perusing the National Institutes of Health website when I came across fascinating research on an unlikely effect from being born to an older mom–being childless. 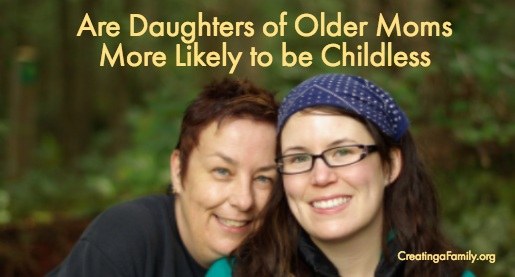 We know that woman in the US and other developed countries are waiting longer to have children. I am interested in the impact this significant societal shift will have on woman, families, and especially children. Recent research funded by the National Institutes of Health (NIH) found that daughters of older moms are more likely to be childless as adults. (Thank you US taxpayers for supporting this type of research!)

This study is part of the large Sister Study–a Study of the Environmental and Genetic Risk Factors for Breast Cancer. This particular analysis on the impact of maternal age on childlessness in daughters looked at 43,135 women, 98% of which were over 50, thus allowing researchers to capture their complete reproductive history.

Are Daughter’s of Older Moms More Likely to Be Childless?

Researchers found that women born to older mothers were substantially more likely to be childless as adults. 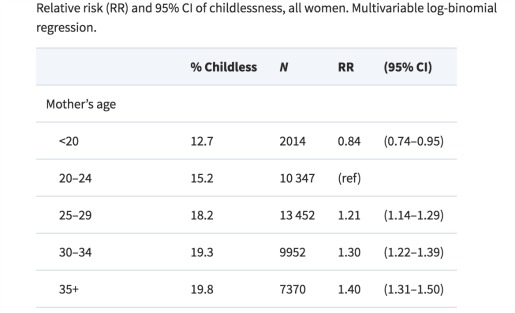 Note that the researchers controlled for various factors that have been shown to affect the decision to have children and how many, including the number of siblings, birth order, and daughter’s educational level. They also controlled for the socio-economic level in childhood and the education level of the parents. Previous research has found that daughters of older mothers are more likely to be unmarried and more likely to achieve a higher education; however, this study controlled for these factors and still saw an increase in childlessness.

This study was not designed to find out why a mother’s age at conception and during pregnancy may influence the daughter’s reproductive function; however, older age is associated with differential gene expression in eggs, and the researchers speculate that this could be the cause. Previous research has found that epigenetic alterations in a woman’s eggs can persist in the next generation, which may explain the higher risk of neurodevelopmental disorders and childhood cancers children of older mothers.

Interestingly, this study did not find an association between older maternal age at birth and daughters’ reports of trying to conceive for longer than one year and only a weak connection with the daughters’ reported use of fertility drugs. This is not an area that has been researched much and the results have been mixed, but one study of women seeking treatment at an infertility clinic found those born to mothers aged 39 or older had a higher risk of menstrual disorders.

Limitations of This Study

The main limitations of this study are that we do not know whether the daughter’s childlessness was voluntary and most of the participants were white and highly educated. Researcher’s concluded:

Whether our results are due to biology, behavior, or socioeconomic factors -or a combination of these, the possible influence of maternal age on offspring fertility deserves further study, particularly in light of the widespread tendency to delay childbearing.

How old was your mother when you were born and have you experienced infertility?