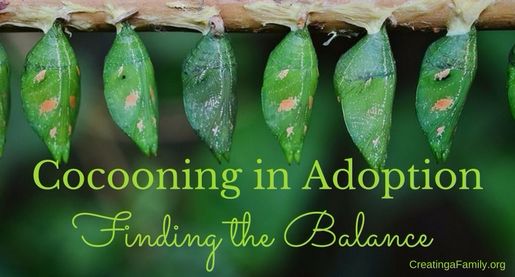 “Cocooning” or “nesting” with newly adopted children has become the holy grail of adoption. Some have cited my book (The Complete Book of International Adoption) as having perpetuated this idea. While I think settling in, simplifying, and focusing care with newly adopted kids is a great idea, I think maybe, just maybe, we may have gone just the tiniest bit overboard.

The idea of “nesting” is to simplify life, settle into a routine, and limit the care of the child to the mom and dad. This is especially important when adopting a child past the newborn stage – in other words, when adopting from foster care or internationally. With adoption, the baby/child’s life has been turned topsy-turvy. The idea of cocooning is to allow life to settle down for the child and parents and to firmly cement in the child’s mind who are mom and dad.

The general gist is to hang close to home for a while: simply life, reduce the number of toys and trips away from home, set up a predictable routine. Generally allow time and space to get to know each other, and to allow the child to learn to trust and rely on her parents. It is the first step in establishing attachment.

Cocooning is a great idea and I’m a big proponent, BUT as with all things in life, moderation is the key.

Human Nature Leans to the Extremes

My friends, in my opinion not only are these extremes not necessary, they can also be harmful for everyone, including the child. Here are a few examples of what I’ve heard people are doing in the name of cocooning. These people contacted me because these situations were causing problems in their lives.

The Number One Thing Parents Can Do For Their Child

Yes, it is important to settle in for a while so your child understands the routines of his life and learns to predict them. Yes, it is easy to over stimulate newly adopted kids. But it is also true that you need to do things during this newly adopted period that support you, that give you pleasure, and that allow you to blow off steam. You also need to allow time for just you and your partner to remember why you married each other in the first place and to make each other feel important and cared for outside of your role as mom or dad.

In many ways, I think the biggest distortion of adoption cocooning or nesting is the drawing of the family circle to exclude grandparents. The primary caregivers need to be mom and dad, but that doesn’t mean that grandmom and granddad can’t have a role as well.

Attachment, as we preach all the time, is a two-way street. Children attach to adults by being cared for by them, and adults attach to children by doing the caring. This is true for parents, but it is also true for grandparents. Most of us want very much for our children to have a deep attachment to our parents and vice versa. This attachment is formed with grandparents the exact same way it is formed with parents – through caring, nurturing and snuggling.

Now, if your parents bug the crap out of you, feel free to use cocooning as your excuse to get a break for a couple of months. In fact, go ahead and tell them that the experts suggest one year. However, if you want your child and your parents to bond because you see value in that relationship, then bring them into your cocoon.

Children, even most newly adopted children, are not so easily confused as to who is the primary caregiver. I’d be careful that the main people doing most of the care are mom and dad, but an occasional bottle, diaper, or bath by grandma is good for all concerned. An occasional Saturday night out while grandparent babysit is even better.

The key is balance. Parents need to be the primary caregivers, but need not be the sole caregivers. Parents need to simplify life and reduce outside commitments, but they also need to continue with the activities that make them feel whole, even if it means they are not with their little cherub 24/7.

Let’s take the case of the mom who contacted me because she felt overwhelmed and depressed. Exercise, and specifically going to the gym, was her main form of stress relief and was a big part of her identity. She had adopted two children (ages 2 and 5) and wanted to do everything in her power to help them attach since they had had a rough start in life. She gave up the gym because she didn’t want to leave them in the gym childcare, couldn’t afford a babysitter during their naptime, and dad was working long hours.

This mom was miserable and was reaching a breaking point. I suggested that her number one thing she could do for her kids was getting herself to the gym at least four times a week. She decided that the only way to do that was to use the gym daycare. She compromised by reducing her usual 1.5-2 hour workout to one hour. Turns out the kids loved getting out of the house and amongst other people as much as she did. She was happier, they were happier, and ultimately I suspect their bonding was enhanced.

Start Slow and Then Decide

Cocooning is great, just don’t go overboard. Did you cocoon/nest after adoption? Did you have a hard time finding a balance?