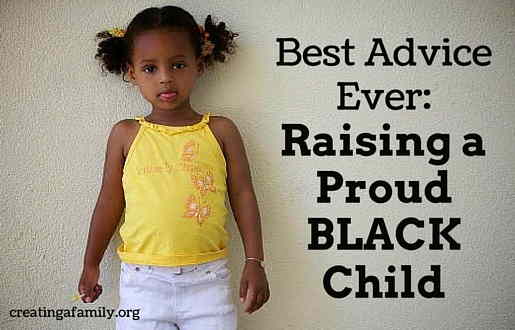 Recently in the Creating a Family Facebook Support Group someone posted a fairly standard article on transracial adoptive parenting covering the typical topics of discussing race, creating diversity in your life, and preparing our kids for discrimination. The focus, as it usually is with transracial adoption articles, was on the reality of racism.

The discussion in the support group was lively, but one comment by Valarie Chavis, a black adoptive mom, stopped me in my tracks with its wisdom and insight. With her permission I share it here. Read it slowly and carefully because it is chock-full of practical information on raising a child of color in America. (On my personal copy, I’ve highlighted almost every other sentence.)

How to Raise a Strong Proud Black Child-by Valarie Chavis

Teach the Value of Blackness

Affirm your children as black without positioning their blackness against whiteness as the standard. Long before there was racism, black people were black. Creating an image and positive self-identity as a black person should not be as a response to racism. This is the mistake I think transracial adoptive parents make.

In several conversations with white parents who have adopted black children across the color line, the focus on one end seems to be mastering hairstyles and skin care. On the other end of the spectrum is a focus on racism. Somewhere in between is real life and the ability to live it joyfully and abundantly in black skin in spite of challenges like discrimination and racism. Raising a black child to thrive and excel is about overcoming barriers while maintaining grace and dignity.

Many have repeated the great words that, “… a black adopted child should not be your first black friend”, but here is another: To raise an emotionally healthy black child you first you must first learn what is wonderful and inspiring about being a black adult.

The Focus Shouldn’t Be on Racism

Black people are not lighter versions of white people, living in their shadows. The differences between being born black and being born white is NOT racism.

I just can’t imagine teaching my daughter to be a strong and proud woman by focusing our conversations on men’s sexism.

A high focus on racism will make your children weary and angry about being black. Racism tells them how others see them it is a constant reminder that others don’t value them. Parents need to help children understand the value and worth that comes from the black experience.

Racism is a manifestation of “white” people believing that some people have little worth or value. Telling your kids that racism is wrong, hurtful, or life threatening tells them how others see them, not how they should see themselves. It doesn’t tell them who they can be and how to reach beyond fear, self-doubt, and find strength and resilience that is part of their legacy.

Arming Our Kids Against Racism

The greatest armor against racism for black kids is to see themselves as a positive reflection of black hope, promise, and achievement.

White children are affirmed daily in every way. Simple things like advertisements in stores of people who look like them, faces on greeting cards and packaging. They are affirmed in school when white history is taught, and the “white man” is always the hero or the champion. Black children see those things, they hear those things and think well what have people like me every done of worth?

Black people have to understand themselves as to how they came to be.

Black children must know how to love the blackness before they can understand why others try to keep them down. One is a strength position, a position of power rather than one of acceptance of the status quo.

4 Things Every Black Child Should be Able to Do

A child should be able to articulate what they love about being black or their blackness. That is hard for many transracial adoptive parents because they struggle to answer that question themselves. I’ve actually had people apologize to me for being born black without understanding that I think it’s a pretty incredible blessing.

Parents need to help their children:

P.S. This advice applies to transracially adopted kids of all races.

P.P.S. When it rains, it pours. I just read another great blog, this one by AdoptiveBlackMom, a black mom raising a black daughter adopted at an older age: Thoughts on Racial Identity Development. She has a different take on helping her daughter love and value all types of blackness. This thought provoking blog helped me see race from a different perspective.

P.P.S.S. It keeps on raining. I just finished Between the World and Me by Ta-Nehisi Coates. I think it should be required reading for all American, but especially for those who have adopted black kids transracially. It is written as a letter to his teenage son where he certainly talks a lot about racism, but he also talks about valuing blackness and recognizing the strength, beauty, and contributions of black Americans.