Would You Post Bail for Your Child’s Birth Parent?

Quite often, we find ourselves as adoptive parents facing situations for which we have no frame of reference or even a “playbook” of strategy to follow. Recently, a member posed a tough question in our online community: would you post bail for your child’s birth parent? The multi-layered conversation that followed proved once again that there are no easy answers when parenting our children by adoption. 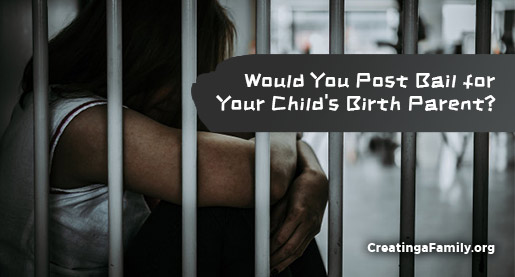 Here’s her question (with permission):

A birth parent of our child whom we have a great relationship with, called and begged us for bail money. [Bail was $100.] Birth Parent has been arrested several times over the past few years for minor traffic violations and not appearing to satisfy those. This is the first time we’ve been asked for help. There are many complicating factors to Birth Parent’s story. Because of this, my husband and I are just so torn to determine what is enabling vs. what is kindness. I’m sure we will still have a good relationship with Birth Parent even if we don’t provide bail money. But we are struggling with how to handle this event. In these situations, it would be so great if there were a playbook we could follow!

Indeed, a playbook for creating a long-term respectful, rewarding open adoption would be a best-seller, wouldn’t it? Well, at least in our adoption and foster care circles it would be.

As we’ve come to expect, our community had a fantastic range of measured responses and sage advice from their own experiences. Keeping with the sports playbook theme, we were fascinated by the different teams of reactions from coaches and players alike. (And yes, I am painfully aware of the middle-aged-mom faults in my metaphor. I’m also obviously seriously ready for football season.)

Here’s how the teams shook out when the group responded to “Would You Post Bail for Your Child’s Birth Parent?”

Not surprisingly at all, there were quite a few experienced players who threw the flag on this question almost immediately. There were general, fairly commonly voiced concerns about “enabling,” about “slippery slopes,” Pandora’s boxes, and the merits of the old “tough love” philosophy.

Indeed, all of those concerns are valid – money is a complicated and multi-faceted issue within families. When children, adoption, and legal matters are mixed in, the “tough factor” goes up like the intensity of that last practice of pre-season.

N.D. spoke up for both “tough love” and “slippery slope” concerns when she said,

It’s hard to keep saying no. Each request will pull at your heartstrings, make you feel like a bad person for not acquiescing. It’s only $100; it’s “only” this or that.  It’s probably the first time she’s asked *you* for help, but the other people she used to get help from have started saying no.

Laura D. suggested that playing for Team Nope was maybe a way of coaching up the birth parent for future life strategy:

You will not be doing her any favors by bailing her out no strings attached; it will only serve to make you feel better about the situation. She owes a debt; it is hers to pay. Does she have a plan to pay you back or all the fines? Has she sought recourse to help herself or ask you with help with that or only asking you for the quick fix? It is hard to say no, but sometimes that is the best answer.

Similarly, Erika pointed out that when money is involved, the dynamics can get messy. Folks can act out in ways that might permanently damage the relationship. The power struggle becomes (even more) weighted on the side of the lender:

Erika later explained that she’s learning to draw clear lines for the relationship with her children’s birth parents. She has to remind herself that her job “is to parent their children with love and devotion, not to parent them.”

We heard from quite a few folks that paying a mere $100 bail for a birth parent would be an easy and definite “yes!” For some of them, it was mostly about the fact that they consider their child’s birth parent to be family, and that’s what family does.

A few folks, like Niki F., thought that this one-time request for help with bail might be the break that Birth Parent needs to break a cycle with support:

I would do it without hesitation, however I have a really open and honest relationship with my son’s birth parent and I would be extremely honest with (birth parent) that this is not something I am going to do on a regular basis. Then I would find out what I could do to support (birth parent) so that it doesn’t keep happening.

Dawn S. has a very open adoption with her child’s birth parent, which informs her support-systems game strategy. Her perspective resonated with many on Team Yes!

…I would in this case. Not because of who she is but because our bail system is horrible for people with minor infractions. I’d even go as far as either paying to clear up the reasons they arrested her or actively helping her find resources to do so. …And I would go to court with her. She is likely intimidated, lacks transportation to court, doesn’t know what to say, etc. and a moral support person can help her face it.

As one would expect in a league as large as the Creating a Family online support group, there was a third team that entered the running.  We’ll call them “Team Consider This” because although they quite often weighed in heavily on the Team Yes! side of things, they also had some significant caveats and considerations that added nuance and depth to the conversation.

The prevailing theme of “Team Consider This” came through as the age-old question of “enabling vs. equipping” the birth parent’s life choices.

For example, several experienced players reminded us of the reality of debt traps that further the vicious cycle of financial struggle faced by many in our nation. Racial profiling also happens – in arrests, in warrants, and prisons.

Safety concerns, both in jail and out in society, primarily when related to addiction-driven behavior, can result in some pretty difficult consequences. Sometimes those consequences serve to hold struggling birth parents further back from getting on their feet.

Knowing when to step in to help the birth parent “break the cycles” is not an easy play call. We have some helpful resources for parents who are trying to maintain a relationship with birth parents who struggle with addiction.

As one member said regarding how to weigh those extra layers,

I don’t imagine there’s a right answer, so you really need to go with your gut: Is the *risk* of your enabling (birth parent) greater than the implications of (birth parent’s) incarceration?

That’s sage advice, no matter what circumstances ended with your child’s birth parent needing to ask for bail. There were a lot of responses that took the form of the question: “but is that enabling?” And almost as many asked back, “or is it equipping?”

Though it might sound like a cop-out, asking “Would You Post Bail for Your Child’s Birth Parent?” resulted in kind of a three-way tie. One that only the original poster of the question could answer for her family.

Ultimately, the unique solution that she came to might not work for your family. Participating in the process of asking ourselves these kinds of “What If’s” when faced with similar dilemmas was an excellent exercise for adoptive parents. So, while we certainly couldn’t answer the question FOR the adoptive mom who asked, we all got to benefit from the problem posed:

There were many extra layers that some of us may not have understood before this conversation. That kind of education and support is always a win.

Tell us in the comments: Would You Post Bail for Your Child’s Birth Parent?