When You Find Out the Adoption “Story” is Untrue

What’s a parent to do when you find out that the story you were told about why your child was placed for adoption is not exactly the truth, maybe not even close to the truth. Should this matter to us? How then, do we handle talking about adoption with our kids? 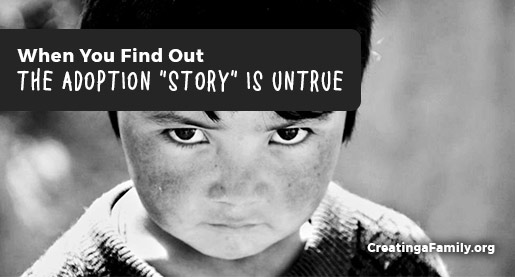 Over the years, I’ve heard from adoptive parents who have found the following changes to the adoption narrative:

We all have a narrative that we believe about why our children came to us through adoption.  This story is told to us by the birth parents or the adoption agency, or we piece it together from the documents and what our kids tell us.  In many ways, this story forms the backbone of our adoption. What happens when we find out that the story is untrue, or only partly true? Should this matter to us? What do we tell our child?

All children come to adoption from tragedy — be it poverty, illness, lack of family support, rape, or abuse.  We know it is a tragedy when a child cannot be raised by his birth family, but we may not know what the tragedy was. The story of the tragedy we were told may not be the truth, or at least not the full truth. Documents may not be available; people with information may not share for any number of reasons; adoption agencies may not have the information; and sadly, adoption workers may not tell all the information they have.

And what exactly is “the truth” anyway? My grandmother used to say there are three sides to any story: yours, mine, and the truth. Stories shift both with time and who is doing the telling. This doesn’t mean that people aren’t telling the truth; it means they are telling the truth as they see it from their perspective at this point in time.

What Do We Tell Our Kids

I believe that children have a right to their story — all of it. Parents must share what they know and what they don’t know. If the story has changed, the children should be told.

But what if the story is especially difficult? What if the story is not “appropriate” for children? What if it involves rape, drugs, prison, kidnapping? Parents must lay the groundwork by talking about their adoption, starting when the children are very young. Parents can then add details as the child ages. The goal is for the child to know all the details by adolescents.