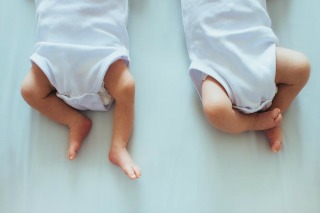 Nancy and Justin Rohde endured years of fertility treatments, only to discover that they were pregnant at the same time as the surrogate whom they had hired. This resulted in two babies with Nancy and Justin’s DNA, born just 5 weeks apart. The phenomenon of the two babies born as full siblings but almost as close as twins has been coined “twinblings.”

The Rohdes, along with Ashley Brown and her husband Josh, spoke exclusively to Cosmo.com about their journey through infertility which included five failed rounds of In Vitro Fertilization (IVF) and a surrogate who miscarried. The Rohdes had just found a new surrogate, Ashley Brown (age 30) and Brown got pregnant just as Nancy and Justin were finishing their final IVF attempt.

“We were pretty scared when we found out I was pregnant,” Nancy told Cosmo. “We were so worried she wouldn’t want to continue on with us. We didn’t tell Ashley that I was pregnant until we saw the heartbeat, around seven weeks.” Once they revealed the news, though, Ashley was excited for both women to go through the experience together.

Cosmo.com followed both pregnancies and detailed the births of both baby girls, Lillian Quinn (born May 2) and Audrey Eleanor, on June 7. The full interview can be found here.