Lena Dunham Had Hysterectomy for Endometriosis: 5 Facts To Know

Lena Dunham, actress and creator of Girls, made headlines when she announced in last month’s Vogue that she had a hysterectomy at age 31 to deal with the chronic pain caused by endometriosis. 6.3 million American woman understand why. In honor of Endometriosis Awareness month, please share this widely. 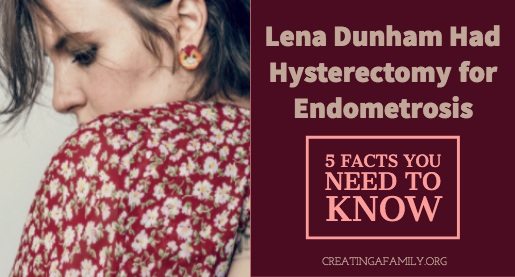 Many doctors are quick to point out that a hysterectomy is not a cure for pain associated with endometriosis, especially if a woman’s ovaries are not removed, as was the case with Dunham.  The uterus is lined with tissue that responds by thickening, breaking down, and bleeding (assuming you are not pregnant) each month to the hormones produced in large part by the ovaries. Endometriosis is the growth of this endometrial tissue outside of the uterus. If the ovaries are not removed, this endometrial tissue that exists outside of the uterus will continue to respond to the hormones produced by the ovaries regardless whether the woman has a uterus or not.

Dunham was well aware that a hysterectomy might not be the total cure and she is not recommending this drastic solution for others; however, she was willing to take the risk for herself. Millions of woman understand why someone would do anything, including forgoing ever being able to be pregnant, to stop the pain of endometriosis.

Endometriosis is a life-altering disease affecting approximately 6.3 million women and girls in the US. It’s amazing how hard it is for women to be diagnosed and treated for this devastating disease. Dunham suffered debilitating pain for 10 years!

Diagnosis is the first step to treatment but is complicated by the number of possible symptoms, and quite frankly, by long-held beliefs about women, menstruation, and pain. Here are 5 facts about endometriosis you should know.

I loved this interview on the Latest Developments in the Treatment of Endometriosis I did with Dr. Hugh Taylor, one of the leading experts in the US on endometriosis and the Anita O’Keeffe Young Professor of Women’s Health and chair of the Department of Obstetrics, Gynecology and Reproductive Science, at the Yale School of Medicine, and Chief of Obstetrics and Gynecology at Yale-New Haven Hospital.