What Made You Decide You Were DONE with Infertility Treatment?

We all have a tipping point. The point at which we say, “I’m DONE. Just done already.” However, when navigating the journey through infertility treatment, it might be harder to get to that tipping point. After all, there are many deep, heart-issues related to stopping treatment. 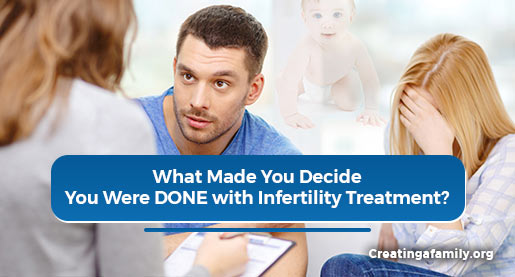 We asked our online community “What Made You Decide You Were DONE with Infertility Treatments?” As you might suspect, the answers were as varied as the members who shared. The raw and honest conversation was a fantastic representation of the issues and struggles that are common to many who face this question.

Of course, given the expense of infertility treatment and the fact that not all procedures are covered (or covered fully) by health insurance, money was a very practical factor for many. The expense and the strain of how to pay for IVF or IUI created pressure on their marriages and took a toll on their physical and mental health as well.

Several of the women added that the massive drain on their finances with no certainty of outcome was particularly emotionally draining. S.S. summed it up well when she said, “after… thousands and thousands of dollars and too many doctor appointments, needles, bruises, and tears to count I just told my husband I was done. I wanted my body and emotions back and in control.”

Taking Back Some Control

Many women shared stories of feeling completely out of control like life was ruled by charting, doctor appointments, medicine schedules, and injections. They felt as if those elements of the treatment, though necessary each cycle, were also shrinking their worlds down to a very narrow focus that felt “soul-sucking.” It was a crushing pace to keep. They needed to say “No More! I’m Done.”

Many infertility patients feel like they’ve lost control of their lives, or at least their emotions, thanks to the erratic hormones of treatment. Each cycle ends up feeling like an emotional roller coaster. It just gets to be too much and saying “I’m DONE” is a means of taking back some control over the path you choose to take toward building your family.

Infertility treatment is not without risk. When one woman discovered through genetic testing that she carries the BRCA gene (putting her at higher risk for breast cancer before even adding the risk of hormones in treatment), she said, “I would rather be alive for my child than to die early.”

Interestingly, several women cited hormone treatment, delicate surgeries, or the discovery of other underlying health issues as ultimately too risky when weighed against other options like adoption. For these women, those were quite literally moments in which they chose life and said, “Enough. I’m done” with infertility treatment.

Ectopic pregnancy, cyst rupture, tumor removal, repeat miscarriages, and other high-risk medical procedures are other factors that contributed to these women saying, “That’s it for me. I’m done.” In those cases, it was just as much about choosing their quality of life as it was life itself. The trauma and even PTSD from those experiences were just too much to choose repeatedly.

H.L. shared that her tipping point came when she and her spouse realized that “we wanted to be parents whether we got pregnant or not.” After some soul-searching and rough experiences of their own, other members of the community shared how they came to that same conclusion.

It’s a tough question to ask oneself in the middle of treatment, but many women agreed that when they got to that point in their journey, they knew that it was time to turn their attention and energies elsewhere.

It’s Not Always A Happy Ending

Though many of the women in this conversation were able to share the creation of their family via adoption or even surrogacy, not everyone has seen the realization of that cherished dream. A few of them shared that they are still working on how to move on from the ending of infertility care, financially and emotionally. Saying “I’m DONE” – even when it’s one’s choice to do so – might bring an end to one part of the journey to build your family. It doesn’t necessarily bring an end to the grief of infertility.

As it is likely to do, life “got in the way” for a few of them. Job loss, illness, and family issues crop up and sometimes force a change in plans. While they knew that continuing treatment was not feasible, some of the members struggle with the fact that they couldn’t continue treatment. They are left wondering “what if I’d tried one more time.” They’ve not yet been able to – or figured out how to – grieve the end of that path. Feelings of hopelessness and failure are a few weighty burdens they carry.

Not surprisingly, the feeling of failure can linger even for women who have gone on to adopt. At an elemental level, being unable to conceive and bear a child makes many infertility patients feel as if their body has failed them. Some women shared that this led them to feel as if they have failed others – like spouses and parents.

When you’ve reached your tipping point, and you say “I’m DONE,” it might be wise to consider some “time off.” Use that time to contemplate your next steps and to allow your mind and body to heal. Again, the emotions of the journey through infertility will take a toll on you.

Many of our members shared that they took the time to research other options for family-building. They also sought counseling, considered whether to build a life without children or how to “live” a little before moving on.

You and your partner know what you need to move forward and the conversation about how to do that can be healing itself. As one member said, this could be the start of a happy new beginning for you.

Other Creating a Family Resources That Might Be Helpful: