Infertility Struggles-Will You Ever Be Happy Again?

Sometimes in the midst of struggling with infertility, especially if you’ve been in treatment a while and have not been successful, you might wonder if you will ever be happy again. Will your life be ruined if you never get pregnant? 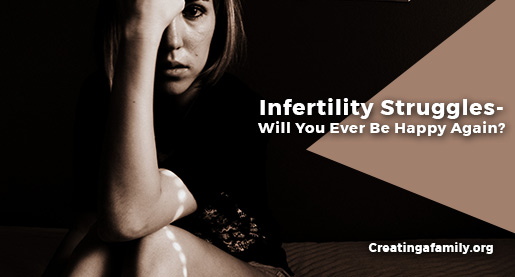 We received the following from someone at a dark point in her infertility struggle.

We’ve been trying to conceive for 5 years and in infertility treatment for 3. We’ve done 5 IUIs, 2 full IVF cycles, 3 FET [frozen embryo transfer] cycles. Nothing has been successful. We have 2 more frozen embies so will be doing one more FET in 2 months. In the last 2 years I have really struggled with depression. They don’t know why nothing has worked and I have no faith that the next FET will work either. I have always envisioned our life with kids—our kids. We don’t want to adopt. I sometimes wonder if I’ll ever be happy again assuming that treatment isn’t successful.

I suspect that this was more of a rhetorical question, but it got me to thinking—how do infertility patients fare once treatment is over-especially if treatment wasn’t successful.

There has been much research on the psychological stress of fertility treatment, but most has focused on patients currently in treatment rather than on how they are doing years later. There are, however, a few studies and their findings are interesting.

If You’re Infertile, Will You Ever Be Happy Again?

One study conducted a life satisfaction survey while couples were in treatment, then did a follow-up survey 10 years later. Of the people who responded 10 years later,

Study Two: Those who were successful with fertility were less satisfied than those who did not become parents.

Another study followed 275 men and 272 women undergoing fertility treatment for five years. They were tested at their first visit to an infertility clinic and then five years later. At the end of the 5 years approximately 50% of the participants had been successful with either treatment or spontaneous pregnancy. Life satisfaction of the study group was compared to a control group of similarly aged individuals who were not experiencing infertility.

On most measures, there was little difference between the satisfaction scores of the study group of infertility patients and the controls. Participants in both groups showed decreased life satisfaction scores across the board in these five years (which is a depressing finding all by itself).

Study Three: Those patients that were not successful in treatment, but went on to adopt a child reported the highest quality of life.

Researchers studied quality of life between four and five years after IVF treatment in 979 men and women. The study subject were broken into four groups:

“Quality of life” was measured by psychological well-being and a feeling of connection.

Perhaps surprisingly, the group that showed the highest quality of life were those whose infertility treatment has failed, but they went on to adopt a child. They showed a higher sense of connection than all groups, including the control and the successful fertility treatment group, and a higher general sense of well-being than the unsuccessful treatment group without kids and the control group without infertility.

Set Point of Happiness is Fixed

I have always found the set-point theory of happiness to be oddly reassuring. This theory holds that our feeling of well-being is determined primarily by heredity and personality traits and remains relatively constant throughout our lives, regardless of what happens. How we view our “happiness” or life satisfaction will obviously move up or down depending on life events, but this theory hold that it almost always returns to its baseline level as we become accustomed to these events over time.

This theory is supported by an interview we did with a group of infertile women who followed different paths to resolve their desire to be mothers: one got pregnant with IVF, one used donor egg and got pregnant, one adopted, and one chose to discontinue treatment and live childfree. All told us they were happy with the way their life turned out–they were satisfied.

Perhaps this will give the commenter some sense of hope that she will eventually adjust to a life without kids, if that is ultimately what happens and what they decide. I hope so.

Other Creating A Family Resources You May Find Helpful