Have We Discovered the Cause (and Cure) for PCOS?!?

Polycystic ovary syndrome (PCOS) is a hormonal disorder affecting about 5 million women of childbearing age in the US. Up to this point, we have not known what causes PCOS, but that may be changing as the result of some exciting new research. 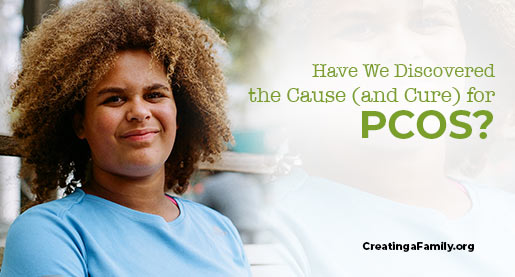 PCOS is one of the most common hormonal endocrine disorders in women throughout the world. Symptoms of PCOS can vary, but generally, women with PCOS will have at least two of these symptoms.

Women with PCOS may have impaired fertility and are also at risk for other health issues such as obesity and diabetes.

Possible Cause of PCOS

We have known for years that PCOS tends to run in families—a woman with PCOS is more likely to have a daughter who also suffers from PCOS. Scientists have been looking for a gene that might explain this pattern, but so far have not found one. However, recent research has shed light on a possible cause.

Most women with PCOS have higher levels of certain hormones, including anti-Müllerian hormone (AMH) as compared to healthy women. AMH levels usually decrease during pregnancy, but researchers found that the AMH levels during later pregnancy of women with PCOS were significantly higher than in women without PCOS. They wondered if the elevated levels of AMH during pregnancy would cause the female children to be at higher risk for developing PCOS in adulthood.

To test this idea, scientists injected pregnant mice with AMH and then studied their female offspring. As these offspring reached puberty and beyond, they displayed symptoms of polycystic ovary syndrome, including later puberty, infrequent ovulation, delays in falling pregnant, and fewer babies.

This discovery of a possible cause for PCOS has led scientists to look for a cure. They have found some success treating the mice with induced PCOS with the drug cetrorelix, a drug commonly used in infertility treatments, such as IVF. This treatment appeared to be successful in mice, and a trial is planned soon for women with PCOS.

According to Robert Norman, Professor of Reproductive Medicine at the Robinson Research Institute at the University of Adelaide in Australia:

If the syndrome is indeed passed from mothers to daughters via hormones in the womb, that could explain why it’s been so hard to pinpoint any genetic cause of the disorder. It’s something we’ve been stuck on for a long time.

The findings may also explain why women with the syndrome seem to get pregnant more easily in their late 30s and early 40s, says Norman. Anti-Müllerian hormone levels are known to decline with age, usually signalling reduced fertility. But in women who start out with high levels, age-related declines may bring them into the normal fertility range – although this still needs to be tested.

Not for the first time in my life, let me say: I LOVE science and the researchers who are searching for clues to explain the unexplainable.