Adoption is a Great Way to Get Pregnant?!?

A member of our support group recently posted that she was told adoption is a great way to get pregnant. And get this — the person sharing this pearl of wisdom was her OB/GYN! 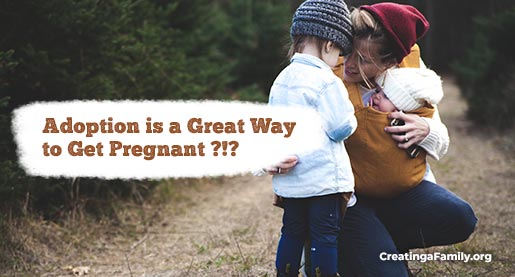 Yes, an OB/GYN actually said that adoption was a great way to get pregnant to a woman who had been trying to get pregnant for several years. After she posted, at least four other people reported that they had heard the same thing and one had heard it from her doctor as well!

It’s hard to know where to even begin with this statement, but let’s start with the truth. I’ll say it a couple of different ways:

Adoption is not a cure for infertility.

Your chances of conception are not improved if you adopt.

Holding and loving a baby will not stir your hormones to conceive.

It is, of course, true that some women who adopt do become pregnant naturally after adoption. (And trust me, once you stop infertility treatment and tell people you are going to adopt, you’re going to hear about every single one of them!)

Another study contacted 2,100 patients ten years after they stopped infertility treatment. They found the 24% of those couples who did not get pregnant through treatment conceived naturally within ten years.

I strongly suspect those who get pregnant after stopping fertility treatment and adopting would fall within the 24-29% of people who would have become pregnant after treatment — regardless of whether they adopted or lived childfree.

My main objection to telling someone that adoption is a great way to get pregnant is that it is not fair. No child deserves to be brought into a family as a means to another end. Each child should be wanted on their own because they are the end goal.

Adopted kids are not and should not be considered as a fertility totem.

It Perpetuates the Just Relax Myth

The statement “adoption is a great way to get pregnant” also sticks in my craw because it perpetuates the myth that infertility patients would get pregnant if they “just relax.” ARGHH!

Yes, stress is a factor in conception. But if it were the main factor (or even a big factor!) everyone would get pregnant soon after discontinuing birth control, when they are still in the “trying to get pregnant is so much fun” stage. Also, if stress were a significant factor in infertility, then no one in treatment would ever get pregnant — because infertility treatment is itself immensely stressful!

Infertility is a disease. Relaxing isn’t a cure.

Now, to be fair, we may be misunderstanding what the OB/GYN was trying to say. Perhaps she was inarticulately trying to say that adoption was a great way to become a parent. But she could certainly have chosen a better way to say it.