At Least You’re Having Fun Trying!?! (Clueless about Infertility) 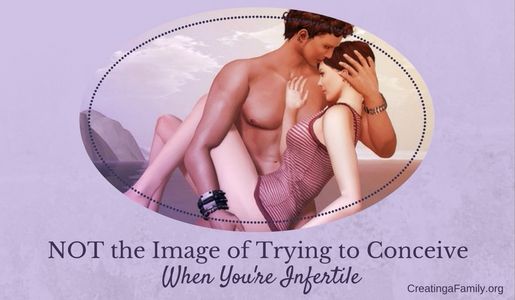 For the record, “trying” is actually not fun. When you think of trying to make a baby, you think of that giddy time when you first start trying to conceive – when each time you had sex you knew that maybe, just maybe, a new life had begun. You remember or imagine that time when the excitement of possibility added extra passion to every touch.

Yeah, we remember that time too. But we’re past it–way way past it.

We’re into the next phase of trying. When lovemaking is scheduled around the ovulation predictor’s pee stick or our cervical mucus reading. Yeah, mucus and pee are about as romantic as they sound.

Sometimes we don’t even remember what it was like to look forward to making love.

We’re into the phase where fear of failure has replaced the excitement of possibility. We do everything possible to not let our hopes get too high so the disappointment isn’t too great.

We’re into the phase where we have to take a break from making love when “it doesn’t count” (when there is no possibility of conception). Yes, imagine that – we have to stop doing something that used to be one of the greatest ways we connected as a couple because it is now weighted with so much darn sadness and anxiety.

We’re into the phase where there are doctors, shots, prodding, and poking.

We’re into the phase where we sometimes cry into our pillow or each other’s shoulders after we make love.

So, for the record, trying isn’t all that much fun.