A Father’s Day Toast to the Infertile Dad 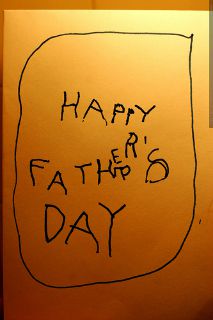 Most of the consultation requests I get are initiated by women. In fact, so much so that I was rather surprised when I received an email from a man asking for a consultation. He and his wife had been trying to conceive for five years, and he wanted to review their current options. When I told him that the easiest way to schedule was to suggest a few times that worked for them, he somewhat sheepishly said that he preferred to talk with me alone.

“Bill’s” wife had various health conditions that combined to make it difficult for her to conceive.  Bill needed a place to talk and ask questions without the burden of protecting her.  Towards the end of our conversation, Bill said, “I know it’s not the same, but the thought of another Father’s Day without hope, makes me feel like sh_t.”

Infertility strikes couples, so regardless of semen quality, the Bill’s of the world are infertile by virtue of their commitment to their wives.  Bill’s need to say “I know it’s not the same” reflects the unspoken truth—we discount the impact of infertility on men.  Make no mistake; infertility is an equal opportunity pain in the heart.

In honor of the Bill’s of the world, I offer this toast.

Here’s to unplayed games:
Tackles not made.
Softballs not pitched.
Frisbees not thrown.

Here’s to the untaught skills:
Changing the oil filter without getting oil all over the garage floor.
Getting to Level 3 in Super Mario Bros.
Treating a woman like she’s the most special person in your world.

Here’s to ungvien advice:
You’re beautiful no matter what some pimpled faced 13 year old jerk says.
Sometime the bravest thing you can do is walk away.
There’s always next year.

So this Sunday, amidst all the revelry, gosh-awful ties, and welcomed hugs for Dads everywhere, give this toast, at least in your mind, to the infertile men of the world.  Because Bill was wrong–it is the same. Infertility makes us all feel like sh_t.