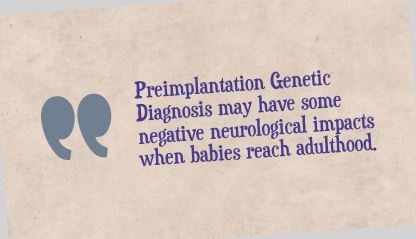 neurological consequences in adulthood.  This study was summarized in the July 22, 2009 issue of Science Daily.

There have been few long term studies of the safety of PGD and embryo screening in humans.  Researchers used mice studies to try to predict safety issues and found that PGD may increase risks of weight gain and memory decline in adulthood.  Scientist examined how biopsies of embryos at the blastocyst could affect fetal, neonatal and adult development. They found that successful births from biopsied embryos were significantly lower than in controls.  After birth, they found that “mice in the biopsied group on average had higher body weight and poorer memory in maze tests. To get a more detailed picture of these memory defects, the authors performed a proteomic analysis of adult mouse brains; 36 proteins displayed significant differences between biopsied and control groups, 17 of which are closely associated with neurodegenerative disorders like Alzheimers and Down Syndrome.”

Keep in mind that this study was on mice and has not been confirmed in humans.  More long term research is needed.