You did not cause your endometriosis and you will not be able to cure it by altering the things you do; however, there are some lifestyle changes that you should make to improve the way you feel and increase the chances that you will be able to get pregnant. 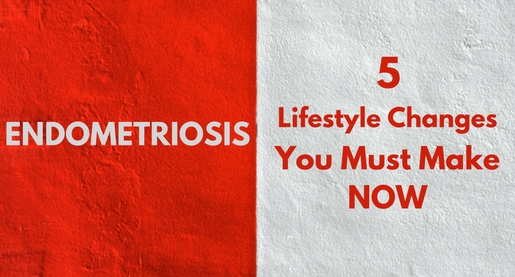 Endometriosis is a disease in which tissue similar to the lining inside the uterus grows outside the uterus causing inflammation and often scar tissue. It affects 10% of women of reproductive age—meaning approximately 176 million women worldwide.

Symptoms can include painful menstruation often with heavy bleeding, painful ovulation, pain during or after sexual intercourse, chronic pelvic pain, and fatigue. It can also cause infertility in about 50% of women.

Endometriosis is a medical condition that requires medical treatment; however, there are some things that a woman can do to improve or lessen the symptoms of endometriosis.

Regular exercise is one of the best things you can do for endometriosis. It lessens menstrual flow, thus may prevent the progression of the disease, and it increases endorphins in your bloodstream, which can help with pain relief.

Mediation or yoga can increase endorphin levels and lessen pain.

Avoid environmental toxins with estrogenic effects such as pesticides, herbicides, and PBA. We still don’t know the full extent of environmental estrogens, but there is strong evidence to suggest that they worsen endometriosis.

If you know you want children, consider having them sooner rather than later. [We know life doesn’t always work out this way, but keep it in mind.]

It is a good idea to try on your own to get pregnant for several months with timed intercourse. But if you have endometriosis do not wait the suggested full year if you are under 35 or 6 months if you are over 35 before consulting with an infertility doctor.

I loved this interview on the Latest Developments in the Treatment of Endometriosis we did on a Creating a Family Radio Show with Dr. Hugh Taylor, one of the leading experts in the US on endometriosis and the Anita O’Keeffe Young Professor of Women’s Health and chair of the Department of Obstetrics, Gynecology and Reproductive Science, at the Yale School of Medicine, and Chief of Obstetrics and Gynecology at Yale-New Haven Hospital.

Creating a Family resources you may find helpful: