Sperm or Egg Donation = Half Adoption?!?

We did a Creating a Family show a while ago on how to know when you are ready to move to donor eggs or sperm.  One of the email questions we received and used on the show called using donor eggs “half adoption”. Oh my! The proverbial stuff hit the fan. 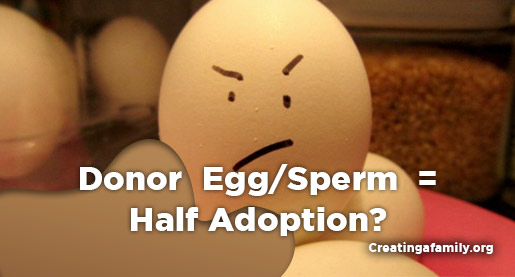 I haven’t gone back and re-listened to the show, but in response to that question, I believe I said something along the lines that there were similarities between using a donated egg for conception and adoption since in both cases the woman would be parenting a genetically unrelated child. The psychologist guest was more diplomatic (of course) saying something like some people felt that way and others did not.

After the show, I received a number of emails ranging from slightly miffed to irate from fertility patients objecting to equating donor eggs with adoption. Marna Gatlin, founder of the great group Parents Via Egg Donation, told me that a heated dispute had erupted on their website message board over this same topic.

I don’t particularly like the term “half adoption” and I don’t use it, but I don’t think it’s completely inaccurate, and I worry about the vehemence of the opposition.

One email said that equating donor egg and adoption demeaned her family and her children. I couldn’t disagree more. Like adoption, a child conceived through donor gametes is not genetically related to one or both parents. But genetics doesn’t define family.

Differences and Similarities Between Donor Conception and Adoption

Significant differences exist between conception through donor conception and adoption. The woman or man that donates the egg or sperm receives compensation and is only giving up “a part,” rather than a whole child. Through epigenetics, the woman who carries the fetus imparts her own influence on the genetic expression in the child. The parents have more control over their child’s environment from the moment of transfer. The mother gives birth and can nurse her child. But even with all these differences, the fact remains that, like adoption, the child is not genetically related to the mother.

We did a Creating a Family show a couple of years ago on the lessons from adoption that can be passed on to the third party reproduction community. We talked about many “lessons”, but the one that stands out for me is the need for children to know their conception and birth story.

I am a fairly gray person—meaning that I usually see both sides, and as a result, don’t often take an unequivocal position on much. I think this “grayness” is an asset in giving unbiased support and information to people considering all their family creation options. But this is one issue that seems totally black and white to me. If we have learned nothing else from adoption, we have learned that family secrets are destructive and that children don’t define mom and dad by biology.

I firmly believe most kids conceived from donor egg and sperm will eventually find out–through family members who know or suspect, from genetic medical testing or consumer genetic testing, or from their parents later in life. It doesn’t matter how, but at some point, they will likely know the truth about their conception. I am equally convinced that in 10 to 20 years we’ll see a spate of research showing that donor-conceived children who found out later in life will feel confused and betrayed. I feel like someone who sees a train barreling down the track toward a school bus parked at the crossing. I’m screaming my warning, but the bus doesn’t move.

Although you may try to convince yourself now that not telling is not the same as lying, it soon will become a lie. A thousand times throughout your child’s childhood, something will come up and you will have to smudge the truth. Maybe it’s your child’s questions about her greenish/blue eyes or athletic prowess; maybe it will be a teacher’s question about a possible learning disability; maybe it’s your child’s fear over your mother and aunt’s breast cancer; maybe it’s every time you fill our a pediatric medical form and include your family’s medical history. Over and over again you will be presented with an opportunity to tell the truth, and failure to do so could be interpreted by your child as a lie.

Parents who are avoiding this conversation can learn the basic how-to’s from adoptive parents. Yes, the initial conversation is awkward. You will stumble over the words and struggle to find the right tone. (Nonchalant?  No, that’s not right.  Heavy? No, no. How about matter of fact? Maybe with a little more delight thrown in?)

If you start early enough, you’ll be having this conversation with an infant or toddler who is more interested in chewing on the book or your finger, so the only one embarrassed will be you. By the time the child starts to comprehend, you’ll be an old pro at both the words and the tone. Gradually and naturally more information is shared through the years in a series of small conversations.

There are few black and whites in modern fertility treatment. The lines will blur even more in the future as scientists develop more ways to help people conceive. This is the future and it is good. But as we march into the future, for goodness sakes, let’s take with us the lessons from the past. Never is this cliché more apt: If we fail to learn from the mistakes of the past, we are doomed to repeat them. The ones who will pay the price are the kids.

P.S.  #1: We have a list of suggested books for help tell children their conception story.

P.S.  #3: For an interesting review of some of the lessons from adoption that might apply to third-party reproduction, read “Old Lessons for a New World: Applying Adoption Research and Experience to Assisted Reproductive Technology”  by the Evan B. Donaldson Adoption Institute.

Other Creating a Family Resources You May Find Useful