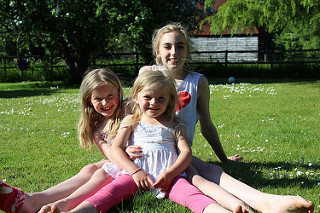 As I’ve said before, there is very little black and white about the emotionally and financially draining quest for parenthood. Here’s a case in point. Is it ethical to create embryos from donor eggs and sperm with the specific intent to “donate” (sell?) to a group of people who are struggling to conceive?

While in the media room at the American Society of Reproductive Medicine conference last month, I ran into the reporter from the LA Times who was researching this story. This practice by a clinic in Davis California, California Conceptions, has been whispered about at infertility gatherings for a couple of years, but as far as I know, this is the first time it has gone public. The journalist promised to tell me when it was published, and I’ve been waiting to discuss this controversy here until the story came out.

In a nutshell, this is what happens. California Conceptions takes sperm and egg from donors. Since both the donors are young, healthy, and fertile, the in vitro process usually results in multiple viable embryos. The clinic offers the resulting embryos one or two at a time to different people looking to conceive. They freeze any unused embryos to offer to future infertility patients. Since the cost of the donor egg, donor sperm, and in vitro process is divided among all the people using the embryos, the clinic is able to offer this process for $9,800 with a guarantee of your money back if you do not get pregnant. The cost has recently increased to $12,500, but it is still considerably less than the typical in vitro fertilization process using donor eggs, which can easily cost $25,000.

California Conceptions has had almost 200 patients so far, and they say that they have a 95% success rate, with half of their patients having twins. With traditional embryo donation, infertility patients with unused frozen embryos can decide to donate these embryos to another couple to use in an attempt to get pregnant. Most clinics and agencies tell me that they have far more people wanting embryos than they have couples willing to donate. The cost of typical embryo donation can range from $5,000 to 18,000, but there is no money back guarantee, and since many of the embryos were created from older couples with fertility problems, most clinics do not have a 95% success rate.

Before the clinic makes a batch of embryos, it sends an extensive profile of a sperm donor and an egg donor to prospective parents. Once the clinic gets buy-in from a few patients, it purchases the sperm from a sperm bank, harvests eggs from the egg donor and combines them in the laboratory. A single pairing can result in a dozen embryos, and the clinic keeps the extras frozen while it looks for patients who want them.

“We want to keep the embryos moving,” Zeringue said. “The goal is not to create a bank.”
The clinic usually has a supply of about 10 unclaimed embryos available, he said.

The clinic says that all donors and intended parents are fully informed of what is being done. It is important to note, that typically any embryos from IVF, even with donor egg and sperm, are being created for a specific intended parent and belong to those parents, not the clinic. In this case, the embryos “belong” to the clinic not the intended parents.

Do you see a problem with this? Are we on the slippery slope of selling humans? Does this differ in any significant way from other forms of infertility treatment?