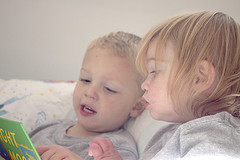 A new European study, presented at ESCHRE, shows that parents using sperm donation are displaying a preference for full genetic bonds between siblings when possible. In describing the reasons for this preference, couples noted that the genetic link between children encouraged better sibling relations, and that visible and other resemblances between the children would underline family ties.

Sara Somers and colleagues at the Ghent University Hospital and Ghent University in Belgium performed the study with heterosexual and lesbian couples between 2012 and 2013. The findings, said Ms Somers, also have implications for sperm banks and clinics, not only in the counseling of their patients about genetic links, but also in the identification, storage and availability of their sperm stocks.