5 Proven Ways to Tell if You’ll Have Twins 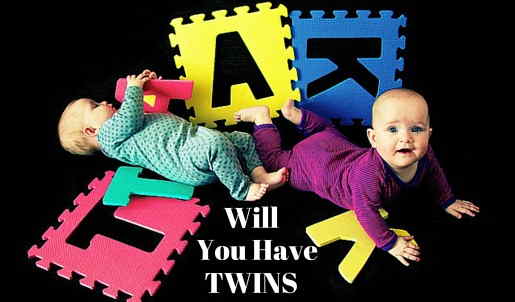 How to Tell if You Will Have Twins

Do twins skip a generation? Technically this is a myth, however, it may seem this way because men may inherit the gene from their mothers, but because they do not have menstrual cycles they are not affected, but can still pass the gene on to their daughters. Their daughters who inherit the gene will have an increased chance of fraternal twins.

The overall rate of twins for all races in the United States is around 33 per 1,000 live births. Black and non-Hispanic white women have similar rates of twinning, while Hispanic women have a lower chance.

3. Maternal age and prior pregnancy history

The frequency of twins increases with maternal age and number of pregnancies. Women between 35 and 40 years of age with 4 or more children are 3 times more likely to have twins than a woman under 20 without children.

Non-identical twins are more common in larger and taller women than in smaller women. This may be related more to nutrition than to body size alone. During World War II, the incidence of non-identical twinning decreased in Europe when food was not readily available.

Infertility treatment increases your risk of having twins, both identical and fraternal. Of women who achieve pregnancy with clomiphene citrate (Clomid), approximately 5% to 12% bear twins; less than 1% have triplets or more. Use of injectable fertility meds, such as gonadotropins, has caused the vast majority of the increase in the multiples we see worldwide.

Approximately 30% of pregnancies resulting from gonadotropins are multiples. While most of these pregnancies are twins, up to 5% are triplets or greater due to the release of more eggs than expected. Twin pregnancies are significantly more risky for the baby and the pregnancy as a whole, and there is a push by infertility medical professionals to reduce the twin rate. Keep in mind that patients and doctors can significantly reduce the rate of twins by limiting the number of embryos transferred with in vitro fertilization (IVF).

What other ways have you heard about how to tell if you will have twins?