So You’re Infertile, Why Not Just Adopt? 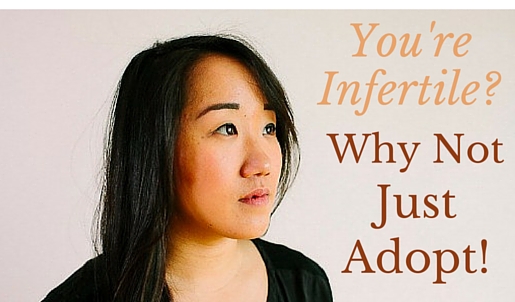 I read an essay by Lisa Belkin in the NYT that got me thinking. The essay, titled Too Many Ways to Have a Baby?, was the fairly standard “Gosh darn, they can do just about anything with technology and where is it going to end” type article, but the part that I found interesting, in a disturbing sort of way, were the comments from readers.

There were a fair number of compassionate comments such as:

But there were also quite a few comments like the following:

Oh my, where to begin?

Why Not Just Adopt??

Indeed, why not just adopt? Well, first of all, while it may be true that there are “thousands upon thousands of children in this country — and many others — waiting for a loving home,” not all of them are available for adoption, and few of them are babies. If only adoption were so simple as merely deciding and picking. Most people who want to adopt will be able to, but it is far from easy or quick.

Adoption Isn’t a Cure for Infertility

Adoption is a “cure” for childlessness, but not for infertility. For some the move to adoption is an easy and logical next step. For others it is not.

Some people yearn to see their genes in the next generation; they crave being pregnant and breastfeeding; they want some degree of control over their child’s intrauterine environment and genetic makeup. For them, parenthood is more than simply parenting. They want to procreate. Is it really that hard to understand that they simply want what comes so easy for most of us?

As someone who chose adoption even though we were not infertile, I can more than attest to the fact that adoption is a great—no, really a phenomenal—way to create a family, but it is not for everyone. I don’t want it to be. That’s not fair to the infertile, and it is certainly not fair to the prospective adopted child.