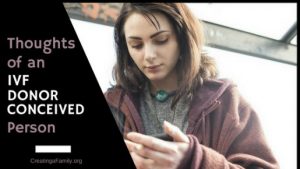 The real experts in how to parent children conceived through donor conception will be the people who have lived this experience. Today’s parents and today’s children will benefit from these voices.

I recently read an article by a 23-year-old woman born in 1994—one of the first children born via IVF with donor embryo. (This process is sometimes called embryo adoption.) Loren’s experience is useful for us to hear.

While we recommend that parents tell their children that they were conceived with the help of a donor from the beginning in age appropriate ways, and we provide lots of concrete details on how to have these conversations and lists of children’s books, Loren’s parents waited until she was 13 to have “the talk”. She could tell it was going to be a serious conversation, especially since her mom “looked like she had the weight of the world on her shoulders.” Like most 13 year olds, Loren assumed she was in trouble, but the “talk” was to tell her that she was conceived by IVF using donor embryos.

I was confused at first, but eventually, I understood that my parents had used a developing form of reproductive science to conceive me and that I wasn’t their biological child. I wasn’t surprised like many people assume I would have been. I had never suspected, but once I knew it all kind of simply made sense.

Loren has never felt ashamed or lesser because of the way she was conceived. “At times I felt it’s given me strength that I otherwise wouldn’t possess. I have never doubted that I was wanted, I’ve always known I was meant to be here on this earth. My conception wasn’t down to mystical chance, I had purpose and meaning to both sets of my parents from the moment I was conceived in my little Petri dish.”

Understanding the Prejudice Against the Infertile

As Loren became a young adult and studied nursing, she began to understand “that some people perceived my existence as problematic or my mother as a lesser being.”

I remember asking one mother [in my nursing practice] who had male and female twins if they were IVF. Her face filled with a kind of fear and she looked at me like she wished at that exact moment I would disappear. She reluctantly confirmed that they were IVF. I smiled and told her so was I, though I joked that being from the 90’s I was properly the result of a far more crude and rudimentary science than her children. She instantly looked relieved and the tension fled her face.

It was that moment I began to feel upset and even angry at the ridicule people like her and my mother would have experienced.

Infertility Doesn’t Make You Less of a Person or Parent

As an adult raised by an infertile couple and as a nurse, Loren has seen the impact of infertility on the psyches of patients. They often feel like a failure.

Finding that you need assistance in conceiving does not mean you have failed, and it doesn’t mean any child you conceive through assisted reproduction is in any way ‘artificial’ or different from naturally conceived children. I’m proud of both my biological mother and my mother. IVF doesn’t make them any different to other parents, and raising a child that was not her own biological material doesn’t make my mother less of a parent.

When I tell people about my story I always say my ‘real parents’, and my ‘biological parents’. What makes you a real parent is your ability to love and cherish your child.

IVF and Donor Parents Should Be Proud

Rather than shame, Loren encourages IVF parent and especially those who conceived using donor gametes or embryos to feel proud.

That my mother endured what she did to become a parent makes me proud. That my father stood by her and never allowed her to doubt herself or give in to the negative thoughts makes me proud. That I get to wake up every day and live a life that is full of adventure, love and fascination make me thankful. Science is a part of me, as are my biological parents. But the biggest part of me is my mother and father and I am so proud of them.

Loren can speak only for herself and her experience. If you are a parent through IVF and donor sperm, egg or embryo, it helps to listen to the voices of many. Here are some resources to help you.