Definitive Guide to Zika for Those Trying to Get Pregnant 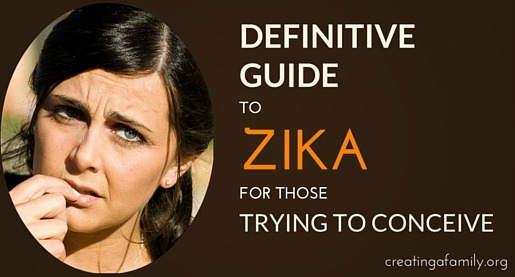 While Zika is indeed a scary illness for women trying to get pregnant, the good news is that there is no reason to panic. The actual risk for women in the US is relatively low, and there are steps you can take to protect yourself and your baby .

What We Know about Zika and Pregnancy

cause a serious birth defect of the brain called microcephaly resulting in small brain growth and impaired development. Other problems have been detected among babies infected with Zika virus before birth, such as defects of the eye, hearing deficits, and impaired growth.

According to Dr. Lawrence Udoff, a reproductive endocrinologist with Genetics & IVF Institute and Fairfax Egg Bank on the Creating a Family show (Impact of Zika on Those in Fertility Treatment), evidence strongly suggests that damage can occur regardless when during the pregnancy the woman is exposed. In other words, there is no safe period where exposure to Zika will not potentially affect the fetus.

There is currently no vaccine to prevent Zika, nor drugs to treat it.
back to top

How Do You Get Zika

The Zika virus is spread to people mainly through the bite by two species of infected mosquitoes, primarily by Aedes aegypti. It also appears that is can be spread by sexual intercourse from the male partner to the female.

Only a few people who have been infected with Zika show any symptoms (approximately 20%), so most people do not know that they are infected. The symptoms are usually mild for those who experience them, although there is a risk for developing Guillain-Barre Syndrome (an auto immune response resulting most often in temporary paralysis). Based on current knowledge, the greatest risk for complications from Zika is to a pregnant woman’s fetus. If a pregnant woman is infected with Zika, she can pass the virus to her fetus.

How often the Zika virus causes the devastating birth defects for those babies exposed prenatally is the big questions for women living or traveling to Zika infested areas. The answer, unfortunately, is not clear.

Although research is still ongoing, according to Dr. Vindana Bhidi, with the Mayo Clinic, on a recent Creating a Family show (Impact of Zika on Those in Fertility Treatment), the encouraging news is that it appears that the likelihood of having a baby with microcephaly after exposure to Zika is relatively low. Researchers reported last month in The Lancet  that the risk of a baby being born with microcephaly after the mother was exposed to Zika in the first trimester of pregnancy is about 1 in 100 (1%).

“It means you have a 99 percent chance of having a normal baby,” said Dr. Laura C. Rodrigues,  a professor of infectious disease epidemiology at the London School of Hygiene & Tropical Medicine, who wrote an editorial accompanying the report.

A weaknesses of this study is that it only reported on the first trimester exposure, while we believe that exposure at any point in the pregnancy can cause fetal abnormalities. Further, this study was not able to determine if the mothers had actually been exposed to Zika since it was a population wide retrospective study.

A study published recently in the New England Journal of Medicine, found that 29 percent of women who had an ultrasound after testing positive for infection with the Zika virus had fetuses with defects, including microcephaly. This was a small study of only 88 patients in one clinic in Brazil.

A particularly troublesome finding of this study was that two fetuses died even though the mothers were infected late in pregnancy (at 25 and 32 weeks). Earlier ultrasounds had shown that prior to infection the fetuses were developing normally.

Much is still unknown. For example, all 88 patients in this study of the Brazilian woman had symptoms with their infection that brought them to the clinic for treatment. Typically only 1 out of 5 people exposed have any symptoms of illness. We do not know if women who have more severe symptoms are more likely to have a baby that is impacted.

We are waiting for the results due in May or June of a similar, but much larger, study (5000 women) in Colombia, which we hope will help us understand the actual risk of having a baby affected by Zika.

As of now, these are seven practical steps all women actively trying to get pregnant should consider.

Most Effective Ways to Prevent Exposure to Zika via Mosquitos

Most Effective Ways to Prevent Exposure to Zika via Sex

Zika can be spread from the male partner to the female via sexual intercourse. If you partner has traveled to a Zika-endemic area, use a condom correctly from start to finish, every time you have vaginal, anal, and oral (mouth-to-penis) sex, or abstain from sex. If you are actively trying to get pregnant, your partner should avoid travel to Zika prone areas. If he must travel, he should use all protections against mosquito bites while there, and you should talk with your doctor before you try to get pregnant or if you are pregnant. This is the case even if he does not feel sick. Tell your doctor if he shows symptom of fever, rash, or conjunctivitis (pink eye).

For years, pregnant women have avoided exposure to chemicals, and many have chosen to not use commercial insect repellents. Zika may be changing that. The CDC recommends women considering pregnancy or who are pregnant use an insect repellent containing DEET, picaridin, IR3535, oil of lemon eucalyptus, or para-menthane-diol. But are they safe for pregnant women?

The truth is that there has not been a lot of research on the long-term effects of DEET insect repellents on pregnant women and fetuses. In one report published in in the journal Parasites & Vectors in 2014, researchers looked at many studies of DEET safety, and only one study, from 2001, specifically looked at DEET use during pregnancy in humans. This study, as well as others that looked at mammals in general, found that DEET can cross the placenta, but they did not find problems in the babies.

The other ingredients (picaridin, IR3535, oil of lemon eucalyptus, and para-menthane-diol) have been studied even less, especially in pregnant women.

Even with the lack of research, experts are clear that for women trying to get pregnant now who may be exposed to mosquitos carrying Zika, the risk to their babies from exposure to Zika is greater than any possible risk from insect repellents. The CDC says: “When used as directed, EPA-registered insect repellents are proven safe and effective, even for pregnant …women.”

What is the Best Insect Repellent to Use for Zika

The CDC recommends using EPA-registered insect repellents.  (If it is registered, somewhere on the label the EPA registration (“EPA Reg.”) # will be listed. Our friends at Consumer Reports have tested the effectiveness of insect repellents specifically against the Aedes mosquito, which is the only mosquito that carries Zika. The insect repellent brands that are most effective for protection against Zika are:

To date all cases of Zika in the US are related to people traveling to Zika prone areas in other countries. Most experts believe, however, that it is likely that this summer (a.k.a the mosquito season) mosquitos in some US states will become carriers of Zika. Based on our experience with similar viruses spread by the Aedes aegypti mosquito, such as dengue and chikungunya, we know that states, like Florida, Hawaii, Texas, and other southern states may well have cases or small clusters of Zika that are spread by infected mosquitoes. However, the CDC says that “it is unlikely that Zika virus infections will become endemic in the continental U.S. in the near future.”

If you live in areas of the US where the Aedes aegypti mosquito thrives, talk with your doctor before you actively start trying to get pregnant and check the CDC site that tracks the number of cases of Zika acquired locally in your state.

You will learn a lot by listening to this Creating a Family show on the Impact of Zika on Those in Fertility Treatment.