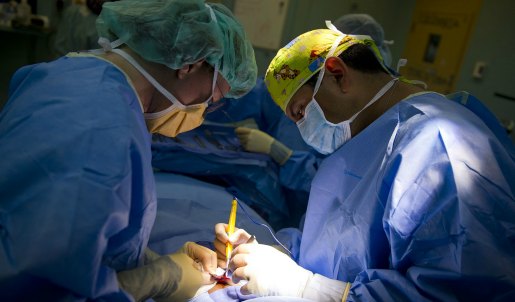 File this under just plain weird, but recent research has found that pregnancy rates were significantly higher among women who had had an appendectomy (54.4 percent), tonsillectomy (53.4 percent) or both (59.7 percent) than among women who had had neither surgery (43.7 percent). Furthermore, those who had either surgery or both got pregnant quicker when they started trying.

Background on the Study

A previous study had found the connection between appendectomies and increased subsequent pregnancy rates and time to pregnancy, so researchers thought it might have something to do with the disruption in the pelvic area after surgery. The finding in this study of the correlation with tonsillectomies, which occur in the throat, makes it unlikely that a disruption in the pelvic area is responsible.

One possible explanation is that this study inadvertently selected women with more frequent sexual intercourse due to higher libido, a more liberal attitude toward sex, or unknown factors. The data showed that the women who had previous appendectomies and tonsillectomies had a higher rate of chlamydial infections, pelvic inflammatory disease, and previous pregnancies, all of which could indicate increased sexual activity.

It is possible that episodes of pelvic inflammatory disease resulting from liberal sexual activity or inflammatory bowel disease necessitated hospital admission with lower abdominal pain which eventually lead to removal of the appendix. … By the same reasoning, a similar group of women developed recurrent throat infections as a result of intimate contact with men, which led to recurrent episodes of tonsillitis necessitating surgery.

However, if a reduction in immune response was the cause of increased fertility, the researchers would expect to see not only an increase in pregnancy, but also a reduction in miscarriages in the women who had the previous surgeries. Although the data may not be complete, researchers saw an increase in miscarriages, thus giving less credence to the immune response explanation.

Another possible explanation is a general reduction in inflammation in a woman’s body after the removal of the appendix and/or tonsils. A degree of systemic or uterine inflammation is essential for normal implantation and pregnancy, however, too much inflammation throughout the body might hurt the embryo or impair implantation. The appendix and tonsils are part of the lymph system and are susceptible to inflammation. “Surgical removal may reduce the risk of attacks of inflammation related to these organs, which could result in improved well-being of young women, including a more permissible uterine-tubal-ovarian environment for pregnancy.”

Why Should We Care?