Should Anonymous Sperm Donation be Banned? 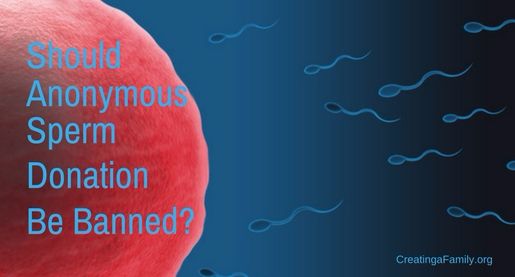 At Creating a Family we talk a lot about keeping the best interest of the children front and center when making decisions in third party reproduction (donor sperm, egg, embryo & surrogacy) and adoption. One of the issues that donor conceived people tell us is that they want information on their genetic history, which is not possible with anonymous sperm or egg donation.

Most in the egg and sperm donation professional community recognize the desire of many donor conceived people to have access to identifying information on their donor, but many are concerned that legally requiring all donors to provide contact information would significantly reduce the pool of possible donors.

I was discussing this dilemma with Michelle Ottey, Laboratory Director and Director of Operations at Fairfax Cryobank, at the American Society of Reproductive Medicine conference. She mentioned that she had a paper with two researchers from Harvard that would be published in the Journal of Law and the Biosciences soon: “Sperm Donor Anonymity and Compensation: An Experiment with American Sperm Donors. I asked her to share her results when they were published.

The aim of our survey and paper (“Sperm Donor Anonymity and Compensation: An Experiment with American Sperm Donors) was to examine the possible effect of mandatory regulated ID release on the sperm donor pool. Historically, sperm donation was mostly conducted using an anonymous donor model where the identity of the donor would never be released to the recipient or resulting children. As the field evolved and more recipients and donor conceived individuals opened up and shared their experiences, ID release donor programs have been developed and implemented at most sperm banks in the US. This change has occurred organically and not through regulatory requirements.

The international regulations around gamete donation are varied; some countries require 100% anonymous donor gametes, some ban donor gametes all together, and some require 100% ID release donor gametes. In some parts of the world significant legislative and regulatory initiatives have been implemented to require the identity of the sperm donor be made available to donor conceived children after they reach a certain age, most often 18 years of age.

Requiring mandatory identification of sperm donors has historically led to an initial decrease in the available number of sperm donors. Cohen and Coan previously published a study that indicated that additional reimbursement for donation may help to keep the donor pool from decreasing due to an ID release requirement. We contacted a sample of currently active and recently retired sperm donors to test this theory.

We found that 29% of the current anonymous donors would refuse to donate if ID release were required, and that no amount of additional reimbursement would cause them to be a part of the program. We also found that those who were anonymous but would have been willing to participate would require an average of $60 per donation.

At Fairfax Cryobank, our ID release program is called ID Option. We do not reimburse donors differently for their participation in the anonymous or ID Option donor programs. Donor reimbursement covers time and travel related to the donation, as well as the required abstinence hours for a sufficient semen sample.

When Fairfax Cryobank first introduced the ID Release program in 2006 it was challenging to recruit donors to this program. Over time, with education from the staff, and with societal shifts in the perceptions around donor sperm we have observed a significant shift and a natural progression toward more men choosing to participate as ID Release donors.

In 2016 66% of the men entering our donor program chose the ID Option program, many of whom did not come in with an initial strong opinion on anonymous versus ID Option. We provide materials and conduct conversations with them about the programs, and many choose ID Option after discussing with our staff.

If the US were to adopt similar regulations as some other countries to require all sperm donors to be identified to the child at some age, we certainly would suffer an initial drop off in new donor recruitment. Some of that could be recovered with increased reimbursement, but there certainly are some wonderful, healthy, qualified men who would chose not to participate.

It was my privilege to work with I. Glenn Cohen and Travis G. Coan from Harvard Law School, as well as my former colleague Christina Boyd to conduct a survey of current and recently retired sperm donors that led to the publication in the Journal of Law and the Biosciences “Sperm Donor Anonymity and Compensation: An Experiment with American Sperm Donors”.