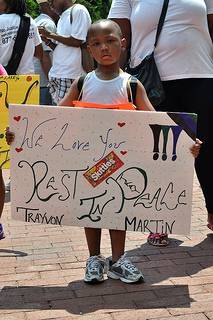 The day after the Trayvon Martin verdict, someone asked on the Creating a Family Facebook Support Group why it was that her Facebook stream was full of talk about the verdict, but she had seen little mention of it by whites on Facebook in general and by white transracial adoptive parents in specific on the Creating a Family Facebook Group.  She wondered how parents through interracial adoption viewed the verdict and if racism was a topic of conversation in our homes.  Well, as you might imagine, we were off and running on that one.

Everyone who posted said that race was absolutely a topic that they discussed in their homes. And really, doesn’t it have to be? How can we possibly raise black and brown kids in this world without discussing race? As parents we must at least try to teach them how to handle themselves as African American, Latino, or Asian teens and adults living in the US in the early to mid 21st century, and like it or not, race is a part of that.  Of course, white parents are at a disadvantage since we haven’t lived the experience.

How Can a White Parent Prepare a Black Child for Racism?

Although it may be harder for white parents to teach our kids about racism, it can be done. We have to talk about race, even when it makes us uncomfortable–especially when it makes us uncomfortable. We have to surround ourselves and our kids with books, movies, magazines, etc. showing diversity. Most important, we must have diversity in our lives and friendships, and we must find role models of color to help us help our kids. We’ve talked about this on many Creating a Family shows/podcasts, including this really good one on Becoming a Transcultural/Transracial Family Through Adoption. This show was specifically aimed to help adoptive parents understand how to find role models. One mom told exactly how she went about finding friends of color and role models for her child even when if felt forced and awkward.

A Great Role Model For Our Kids

I’ve listened to President Obama’s talk last Friday on the Trayvon Martin verdict twice, and will probably listen again. He blows me away. We (and by “we” I mean all Americans, especially trans-racial adoptive parents, and most especially interracial adopted kids) are fortunate to have him as a role model for how to be a black man in America. If you prefer, you can read the transcript rather than watch the video, but I think you will miss the essence—the talk came from his heart.

President Obama put into words something I couldn’t articulate in response to the original question on the Creating a Family Facebook Support Group about why blacks and white responded differently to the verdict. President Obama hit the nail on the head when he said.

I did want to just talk a little bit about context and how people have responded to it and how people are feeling. You know, when Trayvon Martin was first shot, I said that this could have been my son. Another way of saying that is Trayvon Martin could have been me 35 years ago. And when you think about why, in the African- American community at least, there’s a lot of pain around what happened here, I think it’s important to recognize that the African- American community is looking at this issue through a set of experiences and a history that — that doesn’t go away.

And you know, I don’t want to exaggerate this, but those sets of experiences inform how the African-American community interprets what happened one night in Florida. And it’s inescapable for people to bring those experiences to bear.

White parents adopting black children must understand those sets of experiences to help our kids know how to walk the streets of America with pride and safety.

Reason for Hope – The Next Generation

President Obama said, “I don’t want us to lose sight that things are getting better. Each successive generation seems to be making progress in changing attitudes when it comes to race.” Again, he’s so right.

A month or so ago I blogged on the controversy surrounding the Cheerios commercial featuring an interracial couple and their biracial daughter. Check out this video of kids’ reaction to this commercial and the controversy surrounding it. My favorite part was at the beginning when the kids were just watching the commercial. It was so clear that the fact that the mom was white and dad was black didn’t even register—they were simply parents. There is hope for us yet.

Did you talk about the Trayvon Martin verdict with your kids?

P.S. One of the reasons I love the Creating a Family Facebook Support Group so much is that it’s a safe place to talk about all sorts of sensitive topics. If you haven’t joined, you should. Click on the “join” button on the top right of that page.