Deportation a ‘Death Sentence’ to Adoptees After a Lifetime in the U.S. 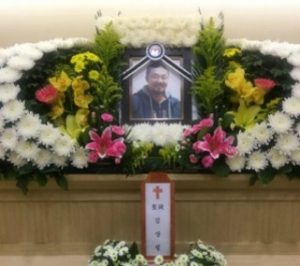 Phillip Clay, known in Korea as Kim Sang-pil, jumped from a 14th story building in Seoul, Korea on May 14th. At 42 years old, Mr. Clay ended his life after years of mental health struggles, brushes with the law both in the United States and later in Korea, and deportation from the United States in 2012. He was a Korean-born adoptee, brought to America at 8 years old, with the understanding that he was going to become an American citizen. Failure by his adoptive parents to complete the then-multi-step process to complete his naturalization, along with his criminal record and undiagnosed mental health struggles ultimately resulted in being returned to his native Korea.

Immigration and Customs Enforcement, or ICE, says that Mr. Clay was deported after “accumulating a lengthy criminal history dating back nearly two decades — the most serious of which included criminal convictions for robbery and multiple theft and drug-related offenses.” But he didn’t know the language or the culture. He had no means of providing for himself and no mental health care. Struggling in his new, yet native-born country, he also ran into trouble with Korean law officials after deportation.

“Deportation is like the death sentence to them,” said Hellen Ko, a chief counselor at the government-run Korea Adoption Services, who monitored Mr. Clay as a caseworker. “They had a hard time adjusting to life in America. It gets even harder for them when they return here.”

Clay’s story is one of the many that have come to light in recent years as gaps are being revealed in the adoption process from other countries to the United States There are actually no clear cut records of just how many Korean adoptees since the 1950’s have been deported back to Korea, as the US doesn’t actually include information such as “adoptee” on the deportation paperwork. In 2000, the Child Citizenship Act was passed, granting automatic citizenship to children adopted by United States citizens. However, that law did not retroactively grant citizenship to the adoptees who were already legal adults. In recent years America has gotten increasingly aggressive in deporting illegal immigrants, particularly those with criminal records. That leaves these adult adoptees vulnerable and shocked, especially when most who had no idea they aren’t citizens.

Perhaps the most widely known of these cases is Adam Crapser. He was adopted as a baby from Korea. In addition to not completing his naturalization paperwork, his first adoptive family abandoned him. Adopted again by another family who abused him, Crapser got into trouble with the law and has a criminal record. He later married and worked hard to get his life on track again. Applying for a green card triggered a background check that reveal non-citizen status. Despite a social media campaign on his behalf, he was deported in 2016. He has three daughters whom he hasn’t seen in 15 months and his marriage is understandably struggling.

This past spring, South Korea sent representatives to appear before the US Congress to advocate for the Adoptee Citizenship Act, “a proposed law that would give citizenship to anyone adopted before turning 18, regardless of how long ago the adoption took place.” However, that bill is currently stalled since election season late last year. There is a movement to reintroduce it, as we’ve reported here before, quite extensively.

“After Mr. Clay’s death, South Korean government officials said they were discussing better protection for deportees.” Mr. Crapser believes that it’s not enough. He wants Korea to stand up to the United States when it attempts to deport adoptees. They came to the US with the expectation of citizenship and lived as such, and thus cannot possibly be the “native Koreans” that their new country seems to expect them to be.

The Adoptee Citizenship Act needs your voice. If you share this story, use this social media hashtag to be part of getting the word out: #CitizenshipForAllAdoptees