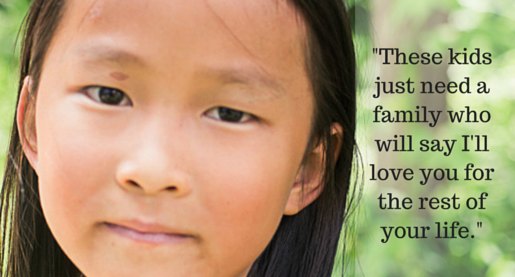 Adoption in general is scary. Adopting a child with HIV is even scarier. We all fear the unknown, and what most people don’t know about HIV/AIDS is staggering. According to one advocacy group, Project Hopeful, the understanding of most Americans about HIV and AIDS has not changed since 1987!

While the general public’s understanding may not have advanced much, medical science has made HUGE advances in the treatment of this disease. HIV is now a chronic, but usually manageable, disease.

The fact is, science and medicine have come so far that “we would rather treat pediatric HIV than juvenile diabetes,” says Kenneth Alexander, M.D., chief of pediatric infectious diseases at the University of Chicago. “If you look at how well our medications work, there’s no reason not to expect that [children with HIV] will one day see [their] grandchildren.”

One child living and thriving with HIV is Lily. Her parents were living in her birth country in Eastern Asia when they adopted so the adoption process and the lack of preparation before adoption is not typical of international adoptions in the US. Their life and message post adoption, however, is very typical.

Difference Between HIV and AIDS

How You Can’t Get HIV/AIDS

Here is how you cannot get HIV/AIDS:

HIV is only transmitted when the virus enters the bloodstream. HIV infection is transmitted in three ways: unprotected sex with a person who has HIV/AIDS; direct contact with infected blood (usually through contaminated needles, syringes, or blood transfusion); or from an infected mother to her child (during pregnancy, childbirth, and/or breastfeeding).

How is HIV/AIDS Treated?

A person with HIV must be monitored for the amount of virus in the blood (know as the viral load) and the strength of his/her immune system, which is measured in part by the amount of CD4 cells in their blood (also called helper T cells).

There are more than 20 medications approved by the FDA for the treatment of HIV. These medications decrease the amount of the virus in the body and can often reduce the virus to undetectable levels in the bloodstream.

Initially while the medication is being adjusted and the viral loads are being reduced frequent visit to the doctor are required. Eventually, most children with HIV only have to go to the doctor to check CD4 counts and viral loads every three to four months.

There are many children living with HIV currently waiting for adoption, both in the US foster care system and abroad. You can see some of these kiddos in our Waiting Child section. They include the following:

India doesn’t allow pictures or much information to be shared on the internet about their waiting children, but Children’s House International is seeking families for the following children living with HIV, but otherwise healthy. They report that these children are in possibly the best orphanage they have ever seen and are receiving fantastic care and lots of love.

You can get details on these children at LisaCHIIndia@aol.com.

The good news is that there are lots of resources available to help families and kids living with HIV/AIDs.

We also loved these two resources from the Children’s Right Centre.

Don’t let HIV/AIDS scare you. Don’t let the lies direct your life. These kids can live normal healthy productive lives. They just need a chance… a family who will say I’m willing to bring you in and love you every day for the rest of your life.

P.S. Sharing Dots, a fascinating organization founded by a husband and wife team of “passionate idealists”, produced this video. They provide creative media and marketing solutions to non-profits in Asia by helping them tell their story through visual media and web solutions.  For a really inspiring read, go to their website and read about them and their work.