4 Children For Sale: Story Behind the Picture

Four young kids sitting on the front porch steps beside a sign that read “4 CHILDREN FOR SALE”. The mother in the background turning away from the camera. Take a look at this picture. Take a really good look. It. Breaks. My. Heart. Just try to imagine what those children were feeling. Try to imagine what that mother was feeling. It is beyond imagining. 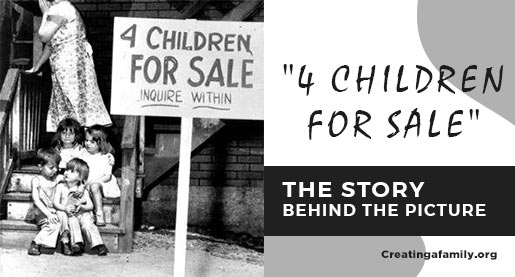 A friend who is not connected to the adoption world sent me this picture a couple of weeks ago. He knew nothing of all the talk about adoption dissolutions, disruptions, and “re-homing” that is swirling about in the news, but this picture reminds us that family dysfunction is not limited to this generation or to adoptive families.

Those faces, combined with the faces of the children in the recent “re-homing” story, haunt me. I wanted to know the rest of the story. Here’s what I’ve been able to find out.

The Story Behind the Picture of “4 Children for Sale”

This picture was taken August 4, 1948, and published in a Chicago newspaper.

The mother, Lucille Chalifoux, was shielding her eyes from the camera, not sobbing as I first thought, according to the newspaper reports from the time, but then how do we really know. She was 24, married to an unemployed man 16 years older, and pregnant with her fifth child in six years at the time of the photo. Who’s to judge her true feelings?

After the picture appeared in papers throughout the US, offers of jobs, homes and financial assistance poured in for this family.

No one knows how long the sign stood in the yard. Apparently shortly thereafter the father abandoned the family, and records show he had a criminal record. Lucille went on governmental assistance. A fifth child, David, was born in 1949.

The storyline is not complete, but David was either removed from the home or relinquished in July 1950. He was covered in bed bug bites and in rough shape. He was adopted by a loving but strict home and ran away at 16, spent 20 years in the military, and has been a truck driver ever since.

Rae says that she was “sold for $2 [in Aug. 1950] so her mother could have bingo money and because the man her mother was dating did not want anything to do with the children.” Milton was standing nearby crying, so that family took him too. Sadly, their new father was horribly abusive. Rae ran away at 17. Milton was removed from the home due to abuse (unclear at what age) and eventually ended up in a mental hospital diagnosed with “schizophrenia and having fits of rage”. He was released in 1967 at age 23. He eventually married, moved to Arizona, and is now divorced.

No one knows what happened to Lana, other than she died of cancer in 1998. SueEllen was adopted, but I’ve not been able to find out any additional information other than she had two sons. She told her children that she was sold by her mother.

What the Kids Have to Say

Pictures tell a story, and this picture tells a mighty sad story– a story that left a lasting impact. The scars run deep… something always worth remembering when we speak of adoption dissolutions and disruptions.

Lest You Think This Doesn’t Happen Now…

There are children just exactly like these four children currently waiting for a family in the US foster care system. They are just as frightened and confused as these kids. Their faces should haunt us as well. Here’s what they look like by the numbers.

Do their faces haunt you too?

Other Creating a Family Resources You May Find Helpful